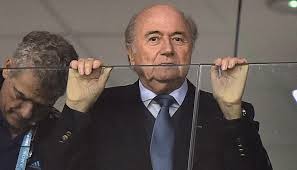 December 5 – Some will mourn his departure, others will rejoice. Sepp Blatter has finally lost his bid to clear his name over ethics violations after the Court of Arbitration for Sport today upheld the former FIFA president’s six-year ban from the game.

At the age of 80, Blatter, cast aside just before Christmas last year by FIFA’s ethics body over the sale of World Cup television rights and that infamous CHF 2 million “disloyal payment” to then UEFA president Michel Platini, had hoped to regain some kind of credibility in the twilight of his career but was always likely to fail at CAS – just as Platini did back in May when sport’s highest court cut the Frenchman’s ban to four years but upheld the original finding of culpability.

As a result Platini was forced to give up running UEFA and now the two men who at one time were the most powerful administrators in world football cannot be seen again in any official football capacity – unless, that is, they stage some kind of miraculous recovery when their bans end.

Like Platini, Blatter’s original eight-year sanction had been cut in February to six years by the FIFA appeal committee. Unlike Platini, CAS refused to hand him a further reduction, instead upholding six years for FIFA’s most colourful and controversial president who ran the organisation for 17 years, splitting opinion both inside and outside the organisation.

That, said CAS, was partly because Blatter himself wanted the ban to be overturned or nothing.

In its written verdict, CAS said Blatter “requested the annulment of the ban but did not request a reduced penalty”.

In any event, it said, the three-man panel of Manfred Nan (Netherlands), Patrick Lafranchi (Switzerland) and Andrew de Lotbinière McDougall (Canada/France) “determined that the sanction imposed was not disproportionate” and that Blatter had  “unlawfully awarded contributions to Mr Platini under the FIFA Executive Committee retirement scheme which also amounted to an undue gift”

As a result Blatter remains banned for six years backdated to October 8 last year and must pay a fine of CHF 50,000.

Both men denied any wrongdoing saying the money was for consultancy work Platini had done for Blatter between 1998 and 2002 and part of a “gentleman’s agreement”. But CAS argued that the orally agreed payment had “no contractual basis.”

Blatter, who was mainly fighting reputational damage, could technically now go to the Swiss federal courts but made it clear back in the summer that at his age and with his career having wound down, he would not go that far.

Arguably his biggest disappointment will be that the CAS judgement effectively wrecks his hopes of one day being named FIFA honorary president.

In reacting to the CAS verdict, Blatter said it was “difficult” to accept but that “the way the case progressed, no other verdict could be expected.”

“I have experienced much in my 41 years in FIFA. I mostly learned that you can win in sport, but you can also lose. Nevertheless I look back with gratitude to all the years, in which I was able to realise my ideals for football and serve FIFA.”

Blatter was re-elected as president of FIFA in May of last year but four days later announced his intention to step down under immense pressure as the US-led corruption scandal weighed down on FIFA. Although he was not among those indicted he himself became embroiled in scandal when he was banned along with Platini.

Succeeded by Gianni Infantino 10 months ago, he remains under criminal investigation by the Swiss authorities over the Platini payment.

And that’s not all. Last summer FIFA’s ethics investigators opened a formal investigation into the $80 million in pay rises and bonuses that Blatter, Jérôme Valcke and Markus Kattner awarded themselves over a five-year period.

That came after FIFA’s American lawyers Quinn Emanuel released details of how that the trio had approved a series of bonuses, saying they had made “a coordinated effort” to “enrich themselves” between 2011 and 2015.