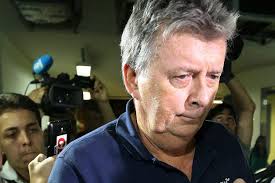 December 5 – Ray Whelan (pictured), the British consultant for Match Services, FIFA’s service provider for accommodation, ticketing and IT solutions who was arrested and detained in Brazil during the 2014 World Cup after being wrongly accused of selling VIP tickets at inflated prices, has broken his long silence over his ordeal by accusing Brazilian authorities of attempting to stage a “TV reality show.”

Whelan has been out of the limelight since being cleared of all charges in February last year but has now come forward to tell his story since the case has only just been officially closed, totally exonerating him despite several failed attempts to appeal the verdict.

Whelan, who was authorised to sell match tickets as part of hospitality deals, was held for 24 days in Rio de Janeiro’s infamous Bangu prison before being released on bail after police seized 83 tickets from his room at the at the Copacabana Palace – plus around $1,200 in cash. Match declared at the time that the tickets were “for past matches, retained as memorabilia from the event, or for future matches or personal use by the senior management of MATCH companies, shareholders and board members as well as members of their families and friends.”

The Brazilian police said he had been arrested as part of a $100 million ticket touting investigation but Whelan’s supporters have long argued the entire case was based on highly spurious information in order for the Brazilian authorities to score a public relations coup after FIFA had warned repeatedly about the illegal sale of tickets. MATCH maintained throughout the case that Whelan, a brother-in-law of the company’s founders Jaime and Enrique Byrom, was simply fulfilling the company’s obligations by legitimately trying to resell packages that had been returned to MATCH at the last minute.

In an interview with Insideworldfootball, Whelan now says he may have been used as a scapegoat and that Rio prosecutors simply failed to grasp the different roles undertaken by the various Match officials.

Now back working for Match and living outside Manchester, he revealed how the entire ordeal affected him and his family.

Setting the record straight for the first time, Whelan, who went from relative anonymity to worldwide infamy within a matter of days, said: “It came as huge shock but they could never produce a single piece of evidence. Obviously I’m relieved this is finally the end because it’s not been pleasant for me or my family or for the company. People say there is no smoke without fire but there was neither smoke nor fire because I was just doing my job. “

Whelan, who was forced to hand over his passport, says that even today he has never been asked a single question by Brazilian police who dealt with the investigation.

“Was there a political agenda for what happened to me? Obviously it’s something I’ve thought about. They tried to put two and two together but couldn’t get four. Yet I was incarcerated for 24 days and allowed out once a day for an hour after being asked the names of my mother and father – and nothing more. I think they wanted the newsworthiness of me being in prison. It was like some kind of tv reality show.”

Central to the charges against Whelan, who for weeks was at the centre of international media attention and who was described by one newspaper at the time as ‘the most wanted Briton since Ronnie Biggs’, were an alleged 900 phone conversations he had with Mohamadou Lamine Fofana, an Algerian alleged ticket tout operating in Brazil during the World Cup.  Crucially, Whelan was unaware that MATCH had put a block on Fofana buying any more packages or tickets but says the evidence against him was completely flawed.

“It’s complete garbage,” Whelan, who doesn’t deny having done business in the past with Fofana, said of the 900 phone calls. “The media just picked it and ran with it. The whole thing was 28 phone calls completed and 17 minutes’ worth of talk time. It was a complete frenzy and we were helpless. It was not even on our radar.”

Whelan refuted accusations that he had tried to evade detention. “I was never a fugitive from justice as was claimed at the time. I was with different members of my legal team at all times. The fact is I should never have been arrested in the first place. The judge said there was no just cause and that the police and prosecutor were inept yet they still tried to appeal. Would I like them brought to task? Put it this way: they certainly have a case to answer. They were hiding behind power.”

Whelan describes as “against human dignity” the fact that the Brazilian authorities appeared to want to make a spectacle of him, sending him to jail by “over-charging in order to hype the case” before producing any evidence.

He has not been back to Brazil since the case was thrown out even though he lived there for a while and his family is part-Brazilian through his  daughter-in-law and grandson. He’s just too bruised, plus the fact that the Brazilian authorities may not exactly welcome him back with open arms.

“I love the country but I don’t know if I’ll return. It’s been a pretty traumatic time. I feel fine now but you never know if you’re running normally or on your reserve tank,” he said.

He has already started writing a book on the whole ordeal, the weakness of the prosecution case and the unjustified reputational damage it caused.

“All I want to do now is simply put the record straight. There are far worse cases of miscarriage of justice than mine but I have an inner self-belief which helped get me through. It’s easier to deal with circumstances when you have a clear conscience.”