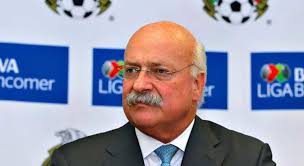 December 7 – Mexico’s Liga MX is to start an 18-team women’s league in 2017. President Enrique Bonilla (pictured) said the league will begin with a cup competition in the spring before the formal season begins in September.

The new league is aimed at boosting the opportunities for Mexican women players and securing a stream of high quality players for the national team.

The Mexican federation (FMF) was one of the founding partners, alongside the Canadian FA, in the US Soccer Federation backed professional National Women’s Soccer League in the US, supplying finance for selected national team players to play in the NWSL.

But the changing geography of the Women’s game in the US and the arrival of Donald Trump as US president and his promise of a wall between Mexico and the US, has led to an increasingly more independent Mexican approach to the game generally, It will be interesting to see how far this communicates through to co-operation on a 2026 Men’s World Cup bid which was widely expected to be awarded to a joint US-Canada-Mexico proposal with the US as the leader and the Canada and Mexico hosting a couple of qualification group.

Foreign players will not be permitted in the new Mexican Women’s league, although Mexico-US dual nationals will be welcomed.

Each team will be predominantly made up of Under-23 players with at least four spots reserved for Under-17 players and two spots for players over 23. Playing squads will have 21 spots, with two for goalkeepers.