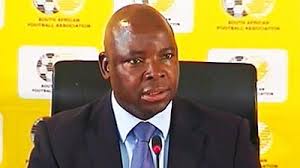 December 9 – Former South African Football Association (SAFA) president Kirsten Nematandani (pictured) has been banned for five years by FIFA’s ethics committee in connection with a match-fixing scandal involving the national team in the build-up to the 2010 World Cup which it hosted.

The offences relate to warm-up matches South Africa played against Thailand, Bulgaria, Colombia and Guatemala in May 2010. Convicted Singapore-based match-fixer Wilson Perumal’s company provided the match officials for the four games and flew in officials from Kenya, Niger and Togo after apparently being given the go-ahead by SAFA of which Nematandani was president at the time.

Nematandani, SAFA head from 2009 until 2013, violated articles on general conduct, loyalty and disclosure, FIFA said in a statement while Musavengana and Tchanile breached rules on bribery and corruption.

Tchanile has already been banned from the sport for three years by his national federation after taking a team masquerading as the Togo national side to play a friendly with Bahrain.

South Africa usually invites match officials from neighbouring countries to handle home friendlies but apparently agreed to Perumal’s offer to fly in the officials from farther away. South Africa were handed two disputed penalties in a 2-1 victory over Colombia in Johannesburg. One of the spot kicks was ordered to be retaken twice after the initial efforts were saved. Colombia’s goal also came from a penalty. Four days later South Africa were awarded two more spotkicks in a 5-0 win over Guatemala in Polokwane.

“The three cases decided related to international friendly matches played in South Africa in 2010, as well as to cases decided by the adjudicatory chamber in October 2015 and March 2016,” a FIFA statement said.

“The investigations, initiated in September 2015, were conducted by Djimrabaye Bourngar, deputy chairman of the investigatory chamber of the Ethics Committee, and the final reports were passed to the adjudicatory chamber on 17 August 2016. In this regard, Mr Nematandani was found guilty of having violated art. 13 (General rules of conduct), art. 15 (Loyalty) and art. 18 (Duty of disclosure, cooperation and reporting) of the FIFA Code of Ethics (FCE) and was sanctioned with a ban from taking part in any football-related activities for five years. Furthermore, the adjudicatory chamber decided that Mr Musavengana and Mr Tchanile had both infringed art. 13 and art. 21 (Bribery and corruption) of the FCE and imposed a life ban on the two former officials.

“As Mr Musavengana and Mr Tchanile failed to provide the adjudicatory chamber with their fax numbers, the terms of these decisions are exceptionally being made public on FIFA.com, as a form of notification, which is in line with art. 36 par. 2 of the FCE. The bans are effective as of 8 December 2016, the date on which the decisions were published on FIFA.com.’

Nematandani was suspended from his role at SAFA in December 2012 after FIFA stated it had found “compelling evidence” that he was involved in all four friendlies. At the time he denounced being implicated, insisting  he had nothing to do with any of the alleged offences and should have been heard before any investigation was launched.

“I have built my reputation through hard work over many years. I was the chairperson of the referees committee for years. Why didn’t I fix matches then? Why would I fix friendly games?”  he was quoted as saying.