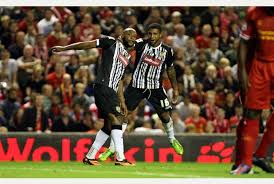 There is something magical about Notts County. They are the world’s oldest league football club, formed six generations ago in 1862, and although relatively few in world football might be acquainted with the Magpies, their impact on the global game is undeniable.

Not least is the fact that, however venerated the Old Lady of Turin might be, it was Notts who in 1903 handed down to Juventus their iconic black-and-white stripes. And ever since that long-passed time of monochrome pictures, the little old Magpies have had to enjoy their successes vicariously through Italy’s strongest club.

Despite being more established than any other club in England, Notts have spent most of their time bouncing about between the second, third and fourth tiers of the English Football League. Dammit, even when they had a brief moment in the sun – their first three post-War seasons in the top division, between 1981 and 1984 – it was their bitter rivals Nottingham Forest who were stealing the show, as recent back-to-back European Cup winners.

In short, Notts have got more warts than Hogwarts. And when a man who styled himself as JK Rowling’s arch-villain Lord Voldemort got his claws into the club, a spell was cast that to this day no one has lifted. Last week local Nottingham businessman Alan Hardy became the latest to do battle with his legacy, rescuing the club from a winding-up order issued by the taxman, who was owed £350,000.

The deal to take over a club threatened with relegation from the English Football League altogether for the first time in their long history, whose players have been paid late and who are under an EFL transfer embargo due to that tax debt, is reportedly going to cost Hardy £5 million. The story of how Notts have come so close to demise is one that football administrators everywhere would do well to know, and it is one I followed more closely than anyone else while working as an investigative journalist at the Guardian.

It began when in the middle of 2009 the Notts County Supporters Trust received an approach from a man clutching a £5 million bank guarantee from First London PLC, an investment bank, promising to win two promotions within five years. This levitation charm was compelling for the Trust chairman, John Armstrong Holmes, who was struggling to keep even his own members happy as on-the-pitch performances were suffering from a woeful lack of investment.

When the man began to talk of his British Virgin Islands-based vehicles, Munto Finance and Qadbak, being backed by billions of pounds in cash from Bahrain, Holmes and the Trust were bewitched. They handed over the keys to the indebted club for the nominal consideration of only £1.

The sweet talker was Russell King, an enormously corpulent man who despite his ostentatious bulk liked to operate from the shadows, a fact that led to him being given the Lord Voldermort nickname. His own name was never put to any document, claiming he was merely a consultant for far wealthier and more powerful figures than himself. This was a ruse that had worked for him before. King was, plain and simple, a fraudster. But there was nothing simple about the beautifully sophisticated fraud he would perpetrate on finance houses, sports entities and governments the world over.

King had taken investors’ money into his vehicle, Belgravia Group, in the Channel Islands tax haven of Jersey. He used it to pay other investors’ interest – a simple Ponzi scheme – and to fund a luxury lifestyle of coastal mansions and BMWs, Range Rovers and Rolls Royces. At one point he tried use his investors’ cash to take over Newcastle United, but despite receiving Sir John Hall for a soirée at his Jersey residence, he could not persuade him to sell the then Premier League club. When finally the ruse was uncovered, upon the death from an aneurism of his partner, Duncan Hickman, King and his underling Nathan Willett shuffled off to Bahrain to find his next mark.

That turned out to be somebody really quite senior in the Bahraini government, who bought King’s promises of clever investment as surely as the Notts County Supporters Trust would later. They set up a new investment vehicle together, Bahrain Capital, which allowed King to return to England and persuade the aforementioned, stock-market listed investment bank, First London PLC to take over this new entity in return for 49% of their own shares.

What is most remarkable about King’s story is that at no point did he ever have to pay any money for anything he did, people just seemed to believe him. And these people were not just anyone. The board of First London contained a former chief of the UK Defence Intelligence Committee, Sir John Walker, and a former UK government minister, Tim Yeo MP. Still King was not done: he had global ambitions for his fraud.

Through his Bahraini connections King had been put in touch with the government of North Korea. The idea was to gain control of the mining rights for the Busan iron-ore mines and launch a mining company, Swiss Commodity Holdings, on the New York or London stock exchange. Of course, the fact that international sanctions meant there was never any chance of getting the commodity out of North Korea didn’t matter to King: it was a fraud.

The next step was to up the profile of his interests. Only by making the world aware of his scheme could he scam the greatest number of people, and this was where football came in. So came the fateful meeting with Holmes and the Trust. Because King had taken great pains to hide his identity no one could possibly know that he would be the ultimate beneficial owner of the club. Notwithstanding, the EFL signed off the deal and allowed Notts County to belong to a shadowy offshore vehicle.

Yet more people were taken in by King’s lies. The former England defender, Sol Campbell, nearing the end of his career, astonishingly pitched up in a County shirt, a shirt bearing the logo of Swiss Commodity Holdings as the club’s title sponsor. More astonishing still was the arrival of the former England manager, Sven Goran Eriksson.

The Swede was a very useful man for King to have around, conferring the profile and respectability he needed to plump up his frauds. Eriksson even travelled to Pyongyang, North Korea’s capital, to give Swiss Commodity Holdings the lustre King needed. As I dug deeper and became more acquainted with what King was up to, talking to the people in Jersey, BVI and elsewhere who knew all about his past and his schemes, every day I would brief Eriksson’s agent about the true nature of things. It was a surreal experience of being apparently the only one capable of seeing through King’s cloak of invisibility.

Later Eriksson told me: “I went on 19 October to North Korea, together with Russell King and Nathan Willett. When I went home from there I started to have doubts because of what I saw in that country and what happened after.

“They cheated. I was invited there to talk football and I met the president of the Football Association there, coaches of the national team, I saw games and the training and I had a lot of meetings.

“Of course this would have cost money and they [King and pals] said everything was OK. When we came home the days went on and I contacted Nathan Willett and I said I needed a contact number for the people in Korea to start to do it. So I prepared places in Europe for them to take their teams for six months and we contacted sponsors to help out about everything.

“I was there for football and they went to visit people at the palace. I saw them handing out share certificates in Swiss Commodity Holding to people. These were not for millions but billions. I tried to joke: why don’t you put some of that into Notts County? And they said, ‘Take it easy, Sven, you’ll have your players and you’ll go to the Premier League.'”

Except he never did. Despite all the promises of money, despite the £5 million bank guarantee, Notts never received any funding either. A new scoreboard and pitch were bought on the never-never, players were promised wages beyond the club’s means and debts of £7 million were run up. Although the side Sven built ultimately won promotion out of the fourth tier, Voldemort’s lies, spawned by envy of the greatness of others in football, had sucked the life out of a grand old club.

King never had any love for football, it was a place in Formula One that he really coveted, and he nearly pulled it off with a takeover of the distressed Sauber team, again on the vacuous promises of future success. That was until I called F1’s controller, Bernie Ecclestone, and gave him warning in an extensive briefing about what King was up to. It meant that King’s ultimate goal – emblazoning Swiss Commodity Holdings’ logo on the livery of a F1 team so that its global profile would lead thousands of people to invest in it upon its listing on the stock exchange, so that he could cream millions off the top – ultimately failed.

Fortunately English football has now introduced measures aimed at preventing a repeat of the Voldermort experience at Notts County. Prospective new owners are now made to meet the authorities in person. They must provide the source of their funds and set out their future solvency to guarantee that the club can continue to trade beyond the short term. It means takeovers conducted by those trying to hide behind multi-layered offshore structures in impenetrable secrecy jurisdictions like the British Virgin Islands have to be reconfigured. If the EFL and Premier League are not satisfied with such structures, they’ll refuse to ratify the takeover.

These are the lessons hard learned by Notts, where the effects of that experience are still being felt nearly a decade on. But, just like in the Harry Potter novels, it is heartwarming that this beloved little community asset refuses to die, whatever the evil attentions of Voldemort.

That said, at this time of rampant takeover activity the reliance on the goodwill of someone local to pick up the pieces of a club threatened with fatal collapse is not a sustainable policy. It must be hoped that across world football associations and leagues adopt similar pre-emptive measures to those in the English game. If not, other clubs might be less lucky than Notts in finding a saviour prepared to wave a magic wand and take on their debts.