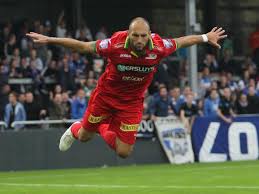 December 30 – KV Oostende have accrued a loss of €7 million in the 2015/16 book year, with the Belgian club’s debts mounting to  €23.4 million. In comparison Anderlecht reported a net profit of €1.6 million.

The seaside club are fourth in the Belgian top flight and on course for a play-off I finish. In the Belgian cup, Oostende will meet KRC Genk in the semi-finals, with the ultimate aim of lifting the trophy and gaining a prized ticket for the Europa League.

In the 2014/15 season KV Oostende made a loss of €4 million. The new losses are in large part due to Oostende’s drive to expand and develop the club, with both higher salaries and transfer fees for players. The club’s stadium has also been modernised.

Billionaire businessman Marc Coucke owns Oostende. He also has a stake in Lille OSC. Coucke and Oostende expect a rise in revenue, reaping rewards from the renovated stadium and the outgoing transfers of Jordan Lukaku to Lazio and Nicolas De Préville to Lille.

Anderlecht, Belgium’s most decorated club, saw their profits shrink considerably from €6.3 million in the 2014/15 financial year to just €1.6 million in 2015/16 after missing out on Champions League qualification.

The club’s gross revenue did however rise from €74 million to €85.7 million, boosted by the lucrative outgoing transfers of both Aleksandar Mitrovic and Chancel Mbemba to Newcastle United. Anderlecht are currently second in the Jupiler Pro League, trailing league leaders Club Brugge by two points.