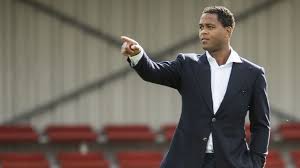 January 5 – Paris Saint-Germain director of football Patrick Kluivert (pictured) has vowed that the French champions will continue to reinforce before the end of the January transfer window.

“We are working on something else,” the former Netherlands international told BeINSports ahead of PSG’s 3-0 friendly win over Club Africain in Tunisia. “We already have two very good players [Draxler and Lo Celso] but it is sure that something else will happen.”

At the start of the year Draxler was officially unveiled as PSG’s newest acquisition. The German is moving from VfL Wolfsburg to the Parc des Princes. He made his debut against Club Africain. Giovani Lo Celso has also linked up with Unai Emery’s team after spending the first half of the season on loan at his formative club Rosario Central.

PSG and Kluivert want a backup for their Uruguayan striker Edison Cavani, who had been in fine touch before the winter break, scoring 24 goals. PSG have, however, been very reliant on their south american and want an alternative come the second half of the season.

“In attack or defense?” said Kluivert. “I have already said that we have a great striker in Cavani but we need another true attacker behind him.”

PSG have been linked to Romelu Lukaku, Carlos Bacca, Moussa Dembele, Kasper Dolberg and Michy Batshuayi, but Kluivert’s preferred option was believed to be Lucas Alario, the Argentina and River Plate striker. PSG Chairman and CEO Nasser Al-Khelaifi confirmed that the South American will not be arriving this month.

The former Barcelona star also revealed that PSG’s two priorities in the second half of the season are to eliminate Barcelona in the round of 16 in the Champions League and to defend their Ligue 1 title. The Parisian club is facing a severe challenge from both Nice and Monaco on the domestic stage.

“To go very far in the Champions League and to win Ligue 1,” said Kluivert. “Those are the most important things for us moving forward.”