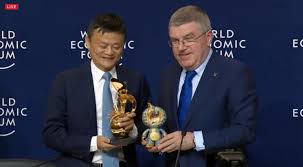 If I were FIFA, I think I would be just a little concerned about this week’s 12-year sponsorship deal between the International Olympic Committee (IOC) and Chinese e-commerce giant Alibaba.

Not sobbing-in-the-toilet, tearing-my-hair-out worried: FIFA, after all, has another Chinese giant, the Wanda Group, signed up as a Partner through to 2030. But a little concerned nonetheless.

Basically, until the big reveal on Thursday among the Masters of the Universe at Davos, those of us who try to monitor such things would have had Alibaba firmly alongside Wanda on Gianni’s team.

At just about FIFA’s darkest hour of crisis in December 2015, remember, an Alibaba Group brand – Alibaba E-auto – had come to the world governing body’s assistance, agreeing an eight-year sponsorship deal, until 2022, for the Club World Cup.

Now, of course, there is nothing to stop an entity like Alibaba from sponsoring both World Cups and Olympic Games. It recently started a 10-year partnership with World Rugby, so it clearly sees benefit in spreading its eggs between more than one basket. However, if you are going to pay the ticket price to be part of the IOC’s sainted TOP worldwide sponsorship programme, which is thought to have raised a bit more than $1 billion in cash and value-in-kind services over the 2013-2016 Olympic cycle, the assumption would normally be that this would take pride of place in your sports marketing portfolio.

Just supposing, then, that FIFA President Gianni Infantino had pencilled in Alibaba as a likely backer of the super-sized 32-team Club World Cup which he floated last November – and why wouldn’t he with an Alibaba brand already a sponsor? – well, he might be wise now not to take this too much for granted.

It was partly the announcement and partly answers given by Alibaba executive chairman Jack Ma at a related press conference that gave me the impression he might be cooling on football.

Asked, for example, if he would increase his investment in the sport -– Alibaba has a big stake in Guangzhou Evergrande, a Chinese Super League club – Ma executed an elaborate sidestep.

First, a self-deprecating story: “I think a lot of people know that I know very little about football. The only competition I joined when I was a sophomore in university, I kicked the ball into my own goal. So I gave it up.”

Then, a shaft of insight: “But I like sports, especially team sports. In China we only have one child per family for the past almost 30 years. The children are always the kings and queens; we have to make them work like a team. This is what interests me about sport – teamwork.”

Then, at the end of the press conference, when the name of Xi Jinping, China’s famously football-loving President, came up in a question, Ma took the opportunity to emphasise that the Chinese leader’s sporting interests ranged beyond just the beautiful game. “Mr Xi, as I know, loves sports, not only soccer,” he said.

So, will this particular big money Chinese sponsor eventually slip away from FIFA’s net? Not necessarily, but I would not now be in the least surprised.

David Owen worked for 20 years for the Financial Times in the United States, Canada, France and the UK. He ended his FT career as sports editor after the 2006 World Cup and is now freelancing, including covering the 2008 Beijing Olympics, the 2010 World Cup and London 2012 and Rio 2104 Olympics. Follow him on Twitter at www.twitter.com/dodo938.