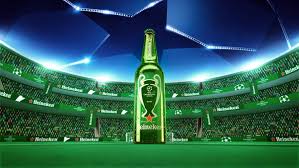 February 1 – Dutch brewer Heineken has renewed its sponsorship of the UEFA Champions League for another three years that will take it to the end of the 2021 competition. The deal also includes the UEFA Super Cup 2018, 2019 and 2020.

The renewal is good news for UEFA who last month were given warning the Italian bank Unicredit will be pulling out of its club competition sponsorships as it reorganises its business. Other current Champions League sponsors are Adidas (who have extended their agreement as an official supplier), Ford, Gazprom, Mastercard, and Sony Playstation.

Heineken has been a UEFA sponsor since 1994. The Heineken brand took over from Amstel in 2005.

No financial figure was announced for the deal but estimates but the previous Heineken deal at $70 million a year.

The contract renewal includes LED Pitch boarding exposure as well as the rights to exclusive Champions League content, like the Back Stadium Tour and UEFA Champions League Trophy Tour, presented by Heineken.

The increasing global audience of the Champions League that UEFA says is “enjoyed” by 4.2 billion people around the world is what makes it attractive to Heineken. The company reckons its the Heineken brand over the eight-year partnership has increase customer awareness by 60% among Champions League fans.

Hans Erik Tuijt, Global Sponsorship Director, Heineken, said; “UEFA Champions League is an integral part of Heineken®’s marketing activities, from Sao Paolo to Shanghai. Our global ‘Champion the Match’ integrated campaign is live in over 100 markets this season. Through this, as well as our acclaimed UEFA Champions League Trophy Tour, we create engaging fan experiences that go beyond the 90 minutes of the match.”