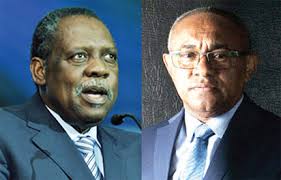 African football is in a dilemma. Not the first time, for that. CAF, the Confederation of African Football, is voting tomorrow and the result may well be remarkable.

Issa Hayatou, presently the longest serving Vice President in FIFA’s new-style Council (the former FIFA ExCo, or Executive Committee), knows all the tricks. He is a survivor, not only in real life and in terms of health issues, but very much so as a relic of the Blatter years that are like an unwanted gift: it keeps giving when one cannot bear it anymore.

Enter football power Madagascar and its Ahmad Ahmad, the opponent who is battling for Hayatou’s seat.

Frankly, anyone with sense would want the Hayatou years to be forgotten and a new era for African football to begin.

His reign has been one of staunch self-effacing loyalty to a man whose electoral antics cost him dearly: in 2002, Hayatou had a grand plan and was opposing Blatter in Seoul. He failed. Quite miserably.

But in Africa, it is quite a different story.

Hayatou is like a Duracell bunny: he keeps marching on from re-election to re-election and one way or the other, he has managed to hold on to power like no other football administrator before him.

A lot has been said about Hayatou, and a lot of criticism levelled against him, much of it with solid foundation, some of it as a result of fake news, but the vast majority of allegations had to do with corruption, malfeasance and nepotism, and favouritism galore.

So, the advent of a new man, a new force, would bode well for a welcome new beginning, one might think.

That is where matters becomes a bit tricky.

If one were to judge people by the friends they keep, Ahmad has a few problems: Amaju Pinnick, a rather questionable Nigerian operator is one of his key supporters and the other man who beats the drum for Ahmad is Musa Bility, a man who reportedly has a criminal record and who was, as a result, banned from running for the ultimate FIFA post of president, but has suddenly morphed into something of a kingmaker in Africa’s presidential election.

Add in Danny Jordaan and his South African FA who are no fans of Hayatou. They threw their weight behind his opponent once it became clear that Jordaan’s massive baggage would not allow him to be elected – not to mention travel freely. And of course there is the new Zimbabwean powerbroker Philip Chiyangwa – a ‘brother’ of Zimbabwe’s despot president Robert Mugabe – a read of his Wikipedia page sends a chill down the spine.

Powerful players, oddly enough, and broadly written about in this publication in the past, and at some length.

The fifth promoter of the anti-Hayatou brigade is one Gianni Infantino, the president of FIFA, although he vociferously claims no involvement whatsoever (but spent lots of time prior to the election and at the height of the FIFA presidential campaigning in, you guessed it, Africa).

So what is the right move for African football: to hold on to the man who is desperate to hold on – Hayatou – or to go for the untested new force with friends that are pretty questionable and wouldn’t pass the fit and proper test in most places (as they haven’t, save Infantino who is above all suspicion of course).

This writer’s view is simple: let Africa do its thing and vote for whoever they see fit. It is they who must live with their choice, it is they who must deal with the fallout. It is they who continue on a path of perceived and real corruption no matter whom they chose, or indeed embark on an untested new way that threatens to be much like the old way except for the redistribution of the spoils into open palms that have little interest in football but a lot of interest in FIFA’s money and football’s riches.

Frankly, from this angle, nothing will change, no mater who the winner is.

The structures of African football will remain ludicrously shambolic, grassroots development doesn’t deserve to be called by that name and youth development will remain a joke.

What will change, is Infantino’s grip on FIFA power.

If the continent goes for Hayatou, infantino’s chances to be re-elected in 2019, are slimming rapidly and the odds will not be in his favour. If, on the other hand, Ahmad carries the victory, Infantino will be able to build on his new-found base and count on the support of the new strong man, Ahmad, when the bell tolls for his re-election.

Therefore, Africa’s vote is for a new president, of course. But it is much more: it is an indicator who the future FIFA president will be: the man who freely distributes development cash like no man before him, or somebody else, yet unknown, who will try to do what FIFA should have done ever since 2011: clean house, lead by example and introduce new ways that no longer resemble the nasty the old ways of an era gone by. For now, it seems, all that has changed is a new name on the door.