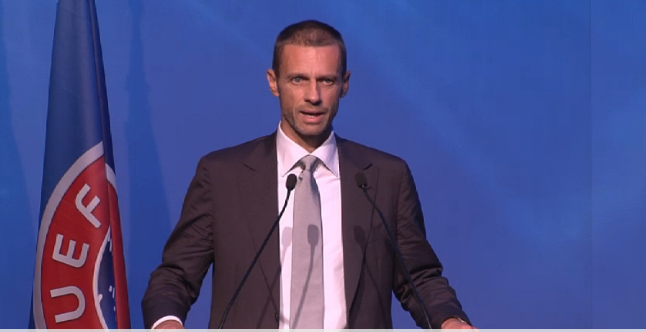 March 22 – UEFA president Aleksander Ceferin says he will stop at nothing to combat football’s most dangerous ills and will soon have an “army” of personnel to tackle the issues involved.

Speaking at the annual Football Talks summit in Estoril, Portugal, Ceferin repeated many of the pledges he made on coming to power last September as he prepares to put a raft of reforms before UEFA’s 55 members at next month’s Congress in Helsinki.

On the theme of  ‘Main opportunities and threats for European Football in the next years’, Ceferin highlighted the scourges of doping, matchfixing, violence and corruption as the usual suspects plaguing the game for which, he cautioned, “no miracle solution has been found so far.”

Focussing on a new UEFA division entitled  ‘Protection of the Game’,  Ceferin told his audience that European foootball’s governing body  “will soon have an army of people to fight this” without elaborating.

Ceferin’s reform proposals have already been well chronicled and include: Introduction of term limits for the UEFA President and members of the UEFA Executive Committee;  candidates for election or re-election on the UEFA Executive Committee having to  hold an active office (president, vice-president, general secretary or CEO) in their respective national association; and the election of independent members to the Governance and Compliance Committee.

“If we, football leaders, don’t lead by example, then one day fans will have enough, and by aversion they will turn away from football.”

UEFA,  Ceferin added, also needed to engage with Silicon Valley and use new technologies to develop football  before turning his attention to the thorny issue of competitive balance within European club competitions, arguably the toughest challenge of his presidency so far with clubs and leagues both keen to have their say and not get left in UEFA’s slipstream.

“We cannot allow the greatness of some to overshadow and drown out the least of us. If we allow gaps to become too great we will be neglecting those who have little opportunities,” Ceferin said in a diplomatic attempt not to rock the boat amongst the various stakeholders.

And UEFA had a duty, he added, to examine such issues as squad capping and fair transfer rules “to avoid player hoarding and excessive concentration of talent within a few teams”.