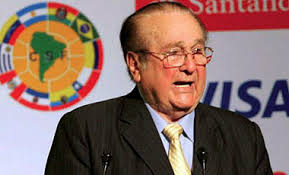 April 26 – CONMEBOL’s internal audit has revealed an unaccounted gap of $150 million as the organisation seeks to establish the full-scale damage of corruption.

South America’s governing body contracted an auditor to run through the organization’s finances and the subsequent internal investigation has disclosed that former CONMEBOL president Nicolas Leoz, who led the organization from 1986 until 2013, was the chief responsible for diverting funds away from the governing body, according to Brazilian media outlet Globo.

Leoz left CONMEBOL over health problems. The Paraguayan has been under house arrest in Asuncion since June 2015, but his lawyers are challenging a request for his extradition to the United States. Leoz, 88, has not commented. His lawyers have always maintained that he is innocent.

On Wednesday (today) CONMEBOL will release the details of the internal audit at its annual congress in the presence of FIFA president Gianni Infantino.

“We have to work in a very open and transparent way, because what has happened in football, both at FIFA level and at CONMEBOL level and federations, can not be repeated,” said CONMEBOL vice-president Laureano Gonzalez.

CONMEBOL has been an organisation plagued by corruption. Eugenio Figueredo and Juan Angel Napout, Leoz’s two successors, were also arrested. The former is under house arrest in Uruguay, the latter is in the United States, maintaining his innocence.

Several other South American football administrators were also arrested or indicted in the FIFA scandal, including the Brazilians José Maria Marin, who is under house arrest in the United States, Marco Polo Del Nero and Ricardo Teixeira.