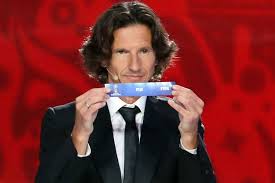 May 10 – Issues of racism and discrimination have been thrust into the spotlight again with the Sulley Muntari case sadly showing that football has a lot more work to do on the issue. FIFA’s response has been depressingly ambivalent; of the “it’s not nice but what do you expect us to do” variety. So what about Russia, the World Cup and the widely documented issues facing that country as it prepares to welcome the world in 2018.

Focus has long been on racism in Russia, and the impact that could have on the World Cup. A TV documentary fuelled the flames when it raised the spectre of Russian fan groups fighting all-comers in an apocalyptic World Cup that would ultimately be more remembered for its violence and xenophobia than footballing beauty.

The image has been planted of a Russia where racism is part of everyday life, football can’t be played without violence, and Russian football fans still eat babies.

After five minutes with former national team playing legend Alexei Smertin you realise that this is probably not how it works in the East.

Smertin is a Russia 2018 World Cup ambassador but has been given a wider anti-discrimination role to spearhead campaigns tackling a variety of issues. Smertin spoke exclusively to Insideworldfootball about Russia’s seriousness in this area, the scale of the task, the initiatives they are undertaking in a multi-ethnic country, and the welcome Russians have waiting for the world’s football fans.

Q: Can you explain your new role in terms of anti-discrimination in the preparation for Russia 2018?

A: It is important to clarify that my remit with the Russian Football Union does not specifically cover the World Cup, but rather the entirety of the Russian football ecosystem. Although Russia 2018 will of course be a huge priority in the coming year and it presents a great opportunity to shine the spotlight on football in Russia, my wider role with the Russian Football Union will be to look beyond 2018, to monitor what is happening in our stadia, to engage with clubs, supporters, authorities and the media, to find better solutions and mechanisms to prevent displays of discrimination. It sounds like a really tough job, it is, however I really am invigorated by it.

Q: Is there a series of programmes that you will bring in to raise awareness of discrimination issues? What is taking place to combat discriminatory issues?

A: Yes, there are a number of programmes and initiatives already in process, and we want to reach out to all parts of the community, not only football fans, to start a national conversation about discrimination. This will assist further with our education programmes in schools, as well as help our work with clubs, supporter groups etc.

Specific projects are already in place at stadia – for example our #StopMat campaign. This sign, displayed at all entrances to stands, encourages people not to use bad language (“Mat” in Russian).

Another example, the All Russia Football Players Union are in contact with players to have them speak against discrimination. This is also important. I have been personally involved with the nationwide football engagement initiative ‘Russia Loves Football’ since its launch in Russia in 2016 – this is a prime example of a campaign to create a more family-friendly and community spirit around football in Russia.

I strongly believe that making the sport more inclusive – engaging the young and old, male and female, and all the many ethnic minorities in Russia – is one of the greatest tools against discrimination.

A: Of course it is serious – wherever discrimination is found in the world it needs to be combatted. In Russia, we want to make our stadia places to come and enjoy football, for everyone. However, I do not see my job as being limited just to the stadia and arenas where football is played and supported: I want to dig far deeper than that, and seek to tackle the root causes of discrimination in the wider community. I cannot comment on FIFA’s decision, only ours. Russia is, as you would expect, using the upcoming Confederations Cup and World Cup as real forces for good, and although I must repeat that I have no specific responsibilities around the World Cup, I know that these two tournaments will really boost my effort to effect social change and bring our peoples together, for a long term benefit.

Q: There have been a number of stories about racism in Russian football as there are everywhere else in the world – how big is the problem? Is it a bigger problem in Russia than elsewhere or is that just a perception held in the west?

A: You’re right, problems around discrimination exist everywhere – not just in Russia. Having said that, of course we want to make Russia a positive example for everyone else. I want, and this is not just a dream, for people in Boston, Tokyo, Dublin, London, Cairo to point to us and say, “Wow, we want the same”.

We, in Russia, want to change perceptions by being the best host ever for the World Cup, and beyond that, to lead by example. There are lots of positive and inclusive football projects underway in Russia, and there will be many more in the coming months and years. Of course, from time to time, mistakes are made, incidents of discrimination occur, however we must make it our goal to eliminate these through inclusivity and engagement – and long term bring more people to into our sport.

Q: There is also a history of violence among football supporters – is this a discrimination issue or ‘tribal’ issue?

A: Part of our overall project, long term is to educate our supporters how to enjoy football. For 90 minutes to totally support your team, but respect those around and opposite you. As you said, this fan violence is an issue in all countries, big and small, it is all about defending the honour of your club and club colours. What we will do is to educate supporters to defend their honour by being honourable. I am proud that Russia was the instigator of the ‘FootballWithoutViolence’ campaign – a project that I endorsed in 2016. FootballWithoutViolence was launched in the aftermath of the violent incidents involving football fans from Russia and elsewhere in France during Euro 2016. As a coalition of prominent personalities from sport, the arts and public life from Russia and around the world, the campaign has sent a clear message that Russia will not stand for any forms of violence and violent discrimination.

Q: What steps are Russia taking to prevent this violence?

A: We are embarking on a widespread programme of education and engagement, and we have also imposed strict – but fair- penalties for misbehaviour. We are also learning from our friends and partners abroad – for example, the Russian authorities are liaising with British police on how they reduced their hooligan problem. Already we have laws passed to prevent known hooligans from entering Russia and to prosecute those here who misbehave.

Q: How real are the threats made by Russian fan groups against foreign supporters? Is this really an issue?

A: Not real. As Manchester United supporters found when they visited Rostov, foreign fans will receive a warm, Russian welcome – and the Confederations Cup in just one month’s time will be a great opportunity for new foreign fan groups to learn about the famous Russian hospitality.

Q: How do you tackle discrimination issues in a country so large and is it about education and changing perceptions?

Yes – those two words again: education and engagement. It is hard, but you know, I see it like a marathon, not a sprint. We prepare well, gather all information on the course, weather, feed stations. You know the distance, the challenges, the twists and turns.

We are working with the Ministry of Education to bring the issue of discrimination into every classroom – tolerance is something that must be instilled in everyone including our young children.

We are also in partnership with the National Students Football League to bring our message into youth teams across the country. We want to drown out discrimination by opening the sport up to everyone in Russia – to all ages, all communities and all ethnic groups.

Q: Will there be sanctions for discriminatory behaviour?

A: Yes, of course. Some are already in place and more will be brought in according to International best practice.

Q: Can you guarantee the safety of non-Russian supporters in 2018?

A: Yes, certainly. The Russian Government, the Russia 2018 LOC, the Russian Football Union as well as the country’s security agencies will ensure that we will all enjoy a great Festival of Football.

Russians are so proud to be hosting the World Cup, giving them the opportunity to welcome hundreds of thousands of guests to their country. Russia is full of surprises from natural wonders to historic cities – but the most lasting impression will be made by the Russian people themselves: they will welcome all non-Russian fans who will visit the World Cup in the spirit of openness and warmth.

And this, I believe, will showcase our beautiful country to hundreds of millions.

Q: Russia is a large multi-cultural country – is the racism aimed at one drop in particular, for example, black people?

A: We have almost 200 ethnic groups in Russia alone and we have many living, working and studying here from all countries in the world. Likewise, we have an incredibly diverse and multi-ethnic football league. In our hearts, as Russians, we welcome everyone.

Racism is only one part of discrimination that we need to address and this is important.

We are also standing up for the rights of all groups and all parts of the community – young and old, male and female, LBGT, the disabled.

As I mentioned before, we are taking international best practices and want to be a World leader in showing how a stadium can be a place where everyone is welcome and you are respected regardless of your religion, race or colour of your skin.