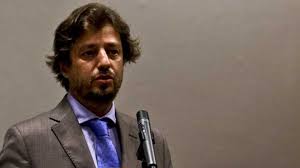 May 12 – The former Portuguese government minister unceremoniously ditched by FIFA in its clearout of senior governance experts looks set to make an immediate return – down the road at UEFA,  FIFA’s biggest rival.

European football’s governing body is keen to snap up Miguel Maduro, who headed FIFA’s governance and review committee,  as part of its own anti-corruption programme, taking advantage of his experience after he was ousted in the Gianni Infantino-orchestrated purge of leading independent watchdogs.

Insideworldfootball has learned from high-ranking UEFA sources that Maduro, who was at the forefront of vetting senior FIFA personnel, is a leading candidate being considered for one of the two positions on UEFA’s recently established governance and compliance committee that are reserved for independent members.

It is believed a decision on who gets the roles is due to be made by UEFA’s executive committee in Cardiff later this month.

The UEFA hierarchy value Maduro’s expertise highly and are keen to offer him a post now that he is surplus to requirements at Fifa – just like ethics chiefs Cornel Borbely and Hans-Joachim Eckert – after just a year in charge of the body that carried out painstaking background checks.

Maduro was championed by Infantino as the perfect governance guru when first appointed but is widely believed to have been removed for barring Russian World Cup chief and deputy prime minister Vitaly Mutko from being re-elected to the FIFA Council over a conflict of interest, a highly embarrassing decision for the FIFA president with the finals in Russia just a year away.

On Thursday,  Infantino rejected this notion, explaining – not altogether convincingly – that FIFA’s governance apparatus simply needed a wider geographical spread because it was top-heavy with Europeans. As a result, Maduro was replaced by his deputy Mukul Mudgal of India.