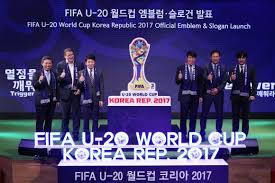 May 19 – This Saturday the FIFA U20 World Cup kicks off with Germany and Venezuela playing the opening match in Daejeon, South Korea, thought the tournament favourites are a two other teams from Europe and South America – France and Uruguay.

South Korea will welcome the 21st edition of the FIFA U20 World Cup which will be played from May 20 until June 11. In the past South Korea has hosted the Confederations Cup in 2001 and the World Cup in 2002, as well as other junior World Cups.

The Koreans were awarded the right to host the tournament in 2013 after edging out Azerbaijan in a vote during an FIFA Executive Committee meeting. The matches will be played in six host cities Cheonan, Daejeon, Incheon, Jeonju, Suwon and Jeju, with the final set to be staged at Suwon’s World Cup Stadium.

Argentina are the tournament’s most successful team with titles in 1979, 1995, 1997, 2001, 2005 and 2007 respectively, followed on five by Brazil. This year’s title challenge is excepted to come from Europe, with France as contenders after an impressive win at the 2016 UEFA European U19 Championship. They also won the tournament in 2013. The French will however be without Monaco star Kylian Mbappe.

Portugal have won the tournament twice and have strength-in-depth in a balanced squad. South American champions Uruguay impressed at their continental championship, winning the title for the first time in 36 years.

The hosts have been paired in group A with England, Argentina and Guinea. The young Taeguk Warriors play their opening game against Guinea. Vietnam and Vanutu will make their World Cup debuts while defending world champions Serbia failed to qualify for the tournament.