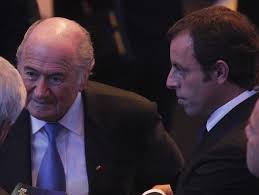 Few seem to understand that former Brazilian chieftain Ricardo Teixeira’s possible/likely/somewhat unexpected crawling to the bosom of the US Department of Justice (for cover?) is potentially the most dangerous reality people like Sepp Blatter, Urs Linsi, Jerome Valcke and one very special Zurich lawyer are facing. And possibly global sportswear manufacturer Nike too.

For former Barcelona president and Brazilian sports marketer Sandro Rosell, now biting the bullet as a result of his finaglings with Teixeira (among other things), cannot be a surprise: when snakes are cornered, they bite.

Rosell’s history with Teixeira is old hat: they were buddies in crime right from the time Brazil secured the most amazing deal any national team had received from a sports goods manufacturer. In this case, Nike. Rosell was the man in the middle, and not only in that deal: he was a lieutenant to the possibly most corrupt of all football men that disgraced the game for decades: Ricardo Teixeira.

If Teixeira opens his book (and we are not talking Rolodex), heads will roll, and swiftly. One is told by those very few who know about a secret meeting aboard a yacht in Piraeus harbour days before the grand opening of the Athens Olympics. The men assembled were Teixeira, Blatter (then FIFA president), Linsi (then FIFA general secretary) and a famous Zurich lawyer. They discussed how to get out of the bind with an ISL matter of pretty huge dimensions, and eventually decided to make a CHF 2.5 million payment to get rid of it. And rid of it they got. For then.

Introduce Teixeira, who foolishly fled his land for sunny Floriday at first, only to realise quite quickly that his skin was on fire when the DoJ started to look closely at what Latin American football was all about: smut, bribes and lies galore. He soon realised that the USA was probably the worst place to be (even if prosecution in his own land was a likely alternative) and left swiftly for Brazil where extradition of a national citizen is barred by the Constitution (just like in Switzerland).

Once on home ground, and after selling his Florida properties, life started to become a rather dreary nuisance with systemic corruption celebrating its heyday in his native land: the architect of the Brazil World Cup (he was the only bidder) who was in bed with anybody and everybody that mattered in terms of Brazilian corruption (many of those are now behind unpleasant bars), he would have had to think and think hard of how to get out of the jam he had created with his ex father-in-law, João Havelange. A jam that made him a very wealthy man indeed by the grace of Mr Kirch and his ISL – and a chap whose name spells ‘cockerel’ in English.

Around the time of the secretive Athens meeting (see above), there was a tale that CHF 11 million was safely stashed in a Zurich bank that is proudly located on Central Square, a stone’s throw from the Central Station and opposite the entrance to Zurich’s red light district. The goodly lawyer who dealt with this and other niceties for father-in-law and son-in-law has quietly passed away since that time, but not without confiding in a select and tiny group of people for reasons one has problems figuring out. The old lawyer, who was a permanent fixture at all FIFA events for years, and always in the front row and treated with maximum respect by all (they knew, didn’t they, they all knew), was always accompanied by a pretty and very young lawyer some 50 years his junior (“she has great potential, you know; I am teaching her”), had a lot of tales to tell, one hears. And what he had to say, the top brass at FIFA already knew. Knew too well. As did some of FIFA’s lawyers. But let’s keep them out of this, for now.

So the old lawyer’s tales, which were actually not tales but a recollection of facts, one is assured, were eye-watering because he was the man to carry the bag in every sense of the word. Whether it was between Zurich and Vaduz or Paris and Rio, he carried it for Teixeira and Havelange, and those tales may come to haunt a few people who wanted to be left alone. Not so.

With Teixeira now appearing to be talking, the question is only ‘how much will he tell’? Of course in (US) law, he would have to tell everything to get away with prison time – that is if he were ever nabbed by the Americans, which seems unlikely at this time.

So the big question is this: why did Teixeira talk at all? Because he definitely has – otherwise Rosell would still be enjoying his freedom (of movement), which he does not appear to be right now.

But if he talked, and we must assume he did, then these men are potentially  in serious trouble too: Joseph Blatter, Urs Linsi and Jerôme Valcke (and quite a few more). Why them? Blatter was Havelange’s “stepson” who slyly levered power away from the old man in a remarkable coup in Paris in 1998. If anybody tells anybody that Blatter was unaware of what was going on, he can be one of only two things: unaware or mentally severely challenged. Neither claim would reflect a sound state of mind. Blatter may never have taken a penny but the buck stopped with him, did it not ? That famous secret Athens meeting nobody talks about (because only very few know) had but one purpose, we are reliably told: to obfuscate, divert attention and hide the truth.

Linsi, quite possibly a first class crook in his own right, worked his sorry butt off to create a narrative that would let all of them get off scot-free, actively advised by the famous Zurich lawyer. Later, much later, when things inevitably turned sour as they always do over time, and Blatter had no further use for him, Linsi got his dirty little hands on millions of FIFA money, had the deal signed off by Finance Committee Chair Julio Grondona (since deceased), and left the trough that fed so many to become wealthy men. He would reappear much later in many other contexts, one of them the pretty awful set of deals that accompanied Germany’s fairy tale World Cup and its fairy-tale head, one Franz Beckenbauer.

And Valcke? Well, good old Jerôme is an unfortunate child of ill fate. Teixeira was one of his closest friends, allies and partners. Valcke headed the Brazil World Cup on FIFA’s side and was key to virtually all decisions that affected or potentially affected FIFA before, during and after the tournament. He didn’t only share bread with Teixeira once he settled into fat Ronaldo’s Rio home (for a mighty amount of money and months on end), no, the bromance was historic and included his presence at all sorts of interesting meetings before the first balls were ever kicked. And if Teixeira talks, Valcke has a problem. Not because he worked with Rosell in Barcelona until very recently (they say) but because of Teixeira trying to save his skin while keeping the money. Valcke knows too much and so does Teixeira.

The question is only: who sings first and what will the tune be. One sees a bleakness for Linsi approaching: he was hated by both, if not everybody at FIFA. Always. Except of course one Mohamed bin Hammam. He liked him (outwardly) but only because in the latter days he hated Blatter. And to deal with Linsi would enrage Blatter. Which is exactly what Bin Hammam did. TBC