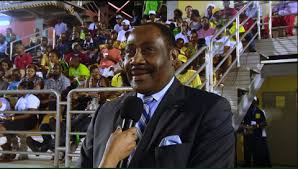 On Tuesday afternoon, June 6, Captain Horace Burrell, 67, passed away at the John Hopkins Cancer Centre in Baltimore, Maryland, USA. He had been battling cancer for more than a year and succumbed to it while undergoing additional treatment.

Burrell, who liked to be called Captain, and whose friends called him Cappa, dominated Jamaican football since 1994 when he was elected to the presidency of the Jamaican Football Federation, JFF. He was a key mover and shaker in the Caribbean Football Union, CFU, and the CONCACAF, the corruption-ridden regional Confederation that was nigh-destroyed by its US and Latin-American leadership and crooked South-American and US marketing gangsters.

It was largely his achievement that the ‘Reggae Boys’ qualified for the 1998 FIFA World Cup in France – a somewhat unreal achievement for a tiny Caribbean country best known for its (football crazy) icon, Bob Marley, its reggae music, its laid-back lifestyle and the beauty of its island nation.

Burrell enjoyed all of that because he did enjoy a good time, “a lime” as they call it on his Rock. But at the same time, and as an army man, he was a disciplined and hard fellow who always recognised achievement and punished underperformance. His ventures into business followed the success of his Reggae Boyz: the Captain’s Bakery rapidly expanded island-wide and made the move abroad to the Cayman Islands where he opened his first operation outside Jamaica.

All of that is pretty well known to most Jamaicans, many Caribbeans and people way beyond his small island nation. Cappa was an imposing man with a strong handshake, a strong will and strong beliefs. He would do anything for Caribbean football but always put Jamaica first.

He came to power in the early nineties and his ties to former FIFA president Sepp Blatter grew when they met more frequently after the Swiss was elected in 1998 after a proper mud-fight in Paris. Alliances were formed there and then and football saw a loyal soldier develop his political skills as a core supporter of Blatter who went the extra mile to help develop Caribbean football.

By force majeure Burrell had to deal with Jack Warner, the CFU President and CONCACAF President for several decades. Warner’s own mantra would determine the CFU’s and CONCACAF’s success or failure for some 30 years, and his and his US General Secretary’s deep-rooted corruption nearly brought the entire building down.

After the ‘Scandal of Trinidad’ in 2011, where Qatari FIFA VP Mohamed Bin Hammam, via his close associate of decades, Warner, allegedly dished out cash presents to the CFU delegates (allegedly because CAS did not find him guilty of having done so), Burrell was suspended for 6 months by FIFA for disciplinary reasons (non-cooperation with an investigation); the initial FIFA ruling was later reduced to three months and a two-year probation, during which time Blatter appointed him to the FIFA Olympic Football Committee and brought him back into the fold.

Much worse were the times after May 2015, when CONCACAF President Jeffrey Webb, was arrested in a Zurich hotel with a number of other football administrators, and shock-wave after shock-wave rocked the organisation. And still does.

In a wide-ranging Indictment, the DOJ of the since disgraced Attorney General Loretta Lynch (who allegedly spoke to Bill Clinton about “grandchildren and golf” in her private jet during the time running up to the US presidential election – the audiotape of that conversation is apparently now about to be released under a FOI request and appears to be very damaging for the self-styled ‘FIFA Slayer’) many observers have pointed to Burrell as “co-conspirator 23”.

Be that as it may, the FBI stopped all investigation against Burrell earlier this year, simply because he was not a relevant part of any wrongdoing, if any wrongdoing at all. At least he knew about that before he passed away and it must have been a big relief for a man who was always a loyal supporter, a hard worker, and not an initiator of nefarious acts in our opinion and experience.

It is not enough to be friends with a crook to be charged with a crime. Not even in the US. We all know lots of crooks in sheep’s clothing – and we rarely know what makes a person tick – until we know. Nobody would have assumed that Webb was crooked, that he had elevated bribery to an altogether new level, a man who reinvented the concept of kickbacks all over again. But the fact that Burrell worked with Webb, partied with Webb and supported Webb as his regional President, never made Cappa a crook himself.

There are those who kept accusing him of all sorts of wrongdoing over the years. Because he was a loyal soldier to Webb’s predecessor, Warner. Because he was a staunch supporter of Blatter for two decades. Because he would not shy away from anything that would bring an advantage to his small island nation or the Caribbean as a whole. What those critics never understood, are the circumstances of a post-colonial Jamaican reality in which Burrell grew up and lived, in a system left behind by the very same type of people who now demand the right to be the guardians of ethics – while they continue to operate every dirty offshore island in the world. And none of those are independent states. They continue to be the servants of deeply corrupt forces that grace Whitehall and Westminster.

Burrell grew up in a system that had nepotism as its mother and favouritism as its father. The same two qualities that shaped the character of the British Empire in the Caribbean, initially called West Indies. But he chose a different path: he joined the army, learned discipline and leadership. Not corruption and crime as many others did in Caribbean banking (which was always British banking).

Cappa was an entrepreneur and a man who made mistakes, like any other man who tries to succeed against the odds. And succeed he did. In business and in Jamaican football. As for the CFU and CONCACAF, he was dealt a rough hand. And with FIFA, he was caught in a system where bits of power were handed out to loyalists. Burrell was a wealthy man. His businesses flourished, he had found a niche and built it with family money and expanded it with his own work and income. The fact that he was never charged by any authority of financial wrongdoing – on the contrary: Jamaican football would not have survived without the Captain’s Bakery as its main sponsor – and the fact that the almighty US never charged him throughout the FIFA Scandal, speaks for the man who has now passed away.

To his haters, this: before you throw stones, look at your own mistakes and if you can loudly claim that throughout your entire professional career you have always, at all times, complied with all laws of whatever land applied, then throw those stones. But beware that one day, out of left field, unexpectedly, somebody, somewhere may surface and deliver evidence that you stole documents, paid for confidential files, threatened secretaries or bribed yourself into a situation that you hoped would remain always undetected. Then throw that stone. But think twice before you actually do.

And to those who loved the man, only this: we knew Cappa as a dedicated father, as a man who loved life and celebrated it, as a buddy who would enjoyed the good time and stood strong in bad times. We knew him as a straight shooter, as a reliable professional who was always prepared to remedy his own mistakes but never cast scorn on those who had failed. He was a man who helped innumerable youngsters to get out of the ghetto, who gave decent jobs to people without hope. He was not a saint. But he was real. May his God be with him.