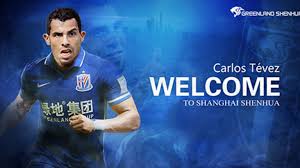 The doubling of the transfer fee will apply to all players bought for more than 45 million yuan (about £5 million).

Chinese clubs have broken repeated transfer records for overseas players in the past 18 months. In the last transfer window the country’s 16 elite clubs spent a record £331 million, easily outstripping England’s Premier League. The country’s spend was 16 times bigger than the total outlay in La Liga and more than the sum spent in Spain, Italy, Germany and France combined.

Among the biggest moves to the Chinese Super League prior to the new rules was Oscar’s switch from Chelsea to join Shanghai SIPG for £60 million last December, then a record transfer deal within the region. But that deal was dwarfed by the reported €84 million Shanghai Shenua spent on Argentinian Carlos Tevez less than a week later.

But the warning signs were that the bubble was about to burst. The official People’s Daily warned that the explosive growth in Chinese football and $1.15 billion in overall spending om 2016 “far exceeded the economic value brought to the league”.

With Tevez having spent a lot of time injured, that feeling has been re-inforced.

The decision to introduce the tax comes days after China’s national team slumped to the bottom of their AFC World Cup qualifying group. The performance of the national team has not matched the ambition of the sports ministry or the spending power of Chinese investors in the sport, though the victory over South Korea in qualifying stood out as an example of how football could ignite Chinese passion.

The transfer tax is the second major reform introduced by the Chinese FA to curb spending on foreign players and encourage Chinese qualified player development. the CFA announced clubs would be permitted to field a maximum of three foreign players per game, with that quota including players from within the area governed by the Asian Football Confederation, in January.

Previously, teams were allowed to field an Asian player in addition to three non-Asian foreigners, but that spot in the starting line-up was replaced by a Chinese player under the age of 23. Clubs must also include a second Chinese player under 23 in their matchday squads.

“In order to realise ‘The General Plan of Chinese Football Reform and Development’ and to benefit the overall development of Chinese football and Chinese local players, to enhance the quality of the national team and to keep the professional league on a healthy, stable and consistent track, the CFA has adjusted the regulations of the 2017 Chinese Super League and the China League,” a CFA statement said at the time.

The transfer tax on foreign players reinforces the CFA’s commitment to ensuring there is opportunity for developing Chinese talent.