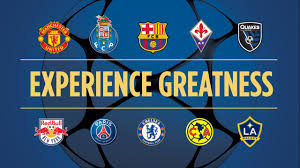 July 19 – Tonight the fifth edition of the International Champions Cup (ICC) kicks off in Detroit, USA, with Roma playing Paris St Germain. Tomorrow Manchester City and United replicate their local derby in Houston. The ICC may lack more than a little sporting integrity but it does deliver the biggest club names.

These four will be joined by Barcelona, Real Madrid, Juventus and Tottenham Hostpur in a pre-season series of friendlies that will go through to July 30 and include an edition of El Classico between Barca and Real Madrid in Miami.

There will also be a clash of Italian giants Juve and Roma – on the East coast of the US in Foxborough of course.

This is the fifth season of the ICC which has grown into a pre-season road tip that will see 12 matches played in 10 cities across the US. The competition may lack a bit of meaning, but its participants are far from meaningless.

The tournament also allows a platform for sponsors to push their brand messages, across the US in particular.

Organisers Relevant Sports have put together a sponsorship roster that includes Heineken as presenting partners, Ally as financial services partner and Tag Heuer as the official timepiece.

The ICC provides a boost for club sponsors looking for global exposure and in some cases this has led to an opportunity for the ICC. Nexen Tire who have recently signed up as Manchester City’s first shirt sleeve sponsor have taken the added step of higher profile branding with the ICC, in which Man City are playing.

“As the US is a critical market for Nexen Tire, we strategically decided to officially sponsor the 2017 ICC USA to establish a stronger position in the American market,” said James Kwon, CEO & President of Nexen Tire America. “Nexen Tire has been growing rapidly in the global market in the past few years, and our aim is to have our brand awareness and market share in the US grow as well.”

While the sponsors look to be bringing their A game, so clubs are expected to bring their first teams. What will be important for the ICC is that there is some competitive edge to these matches and that they deliver more than a pre-season festival atmosphere.

The International Champions Cup is not just a US happening.  A standalone tournament in Singapore will run from July 25 – 29 featuring Bayern Munich, Chelsea and Internazionale at Singapore’s National Stadium.

The ICC is also in China July 18 – 24 for the third year. Participating clubs include Arsenal, Bayern Munich, Milan, Internazionale, and Borussia Dortmund and includes the staging of the 291st Milan derby.

What is clear is that the ICC has now established itself in the world football calendar in a remarkably short space of time. And if nothing else, it is a reminder that the new season is not far away.