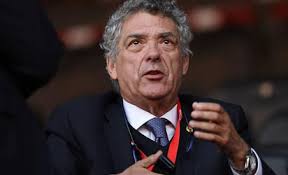 July 26 – Angel Maria Villar’s three-decade reign at the head of Spanish football has come crashing down after he was suspended for a year, throwing his FIFA and UEFA vice-presidencies into serious jeopardy.

The move came a week after Villar, his son and two others were arrested on corruption charges and three days after he was refused bail because he was considered a flight risk.

All four were arrested in raids reminiscent of the infamous 2015 swoop by Swiss police, acting on behalf of US justice authorities, on the Baur au Lac hotel in Zurich that led to the biggest corruption scandal in FIFA history.

The state prosecutor accused Villar, who until now has always managed to maintain his high-profile career despite being embroiled in controversy, and the others of improper management, misappropriation of funds, corruption and falsifying documents.

In suspending Villar,  one of the few survivors from the FIFA executive committee which controversially voted to hand the 2018 and 2022 World Cups to Russia and Qatar respectively, it emerged that a  police investigation has been running for more than a year including transcripts taken during three months of wire taps.

The Consejo Superior de Deportes (CSD) said it took the decision to remove Villar, who had run the Spanish FA for 29 years, a s a “precautionary and provisional” measure and in order to limit the damage done to the national sport pending the outcome of the investigation that has rocked Spanish football.

Court documents indicate that besides misappropriating funds “at least since 2009,” Villar allegedly offered several regional federations favours in exchange for votes. Spain’s state prosecutor also suspects Villar of using his control of the television rights for Spain’s friendly matches to secure economic benefits for his son Gorka, who worked for CONMEBOL under three presidents who have since been indicted in the ongoing FifaGate corruption scandal.

Council president Jose Ramon Lete said the 14-member board voted unanimously to suspend both Villar and the federation’s vice president of economic affairs, Juan Padron, also arrested in ‘Operation Soule’. Lete said the one-year suspensions could be revised “depending on the facts that come out.”

Villar’s positions at FIFA and UEFA now look untenable. He had been a prominent member of the inner circle at both organisations and even ran UEFA on an interim basis between Michel Platini’s demise and Aleksander Ceferin’s election.

He was singled out for questionable conduct in the Michael Garcia report into the 2018 and 2022 World Cup bid process.