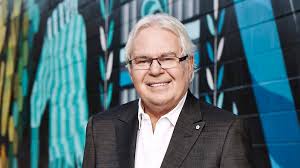 July 31 – Few people were more knowledgeable about football and Australian football in particular than Lászó Ürge who changed his name to Les Murray when people were unable to pronounce or spell it in his second home, Australia.

Murray who had accompanied every World Cup since 1986 for national TV channel SBS, was ‘Mr Football’ in Australia where the Hungarian refugee had settled in 1957 after Hungary’s uprising against the Soviet invasion.

He was the recipient of many awards and orders and made a Member of the Order of Australia in 2006. As a friend and supporter of legendary Hungarian footballer Ferenc Puskás, his work in football was also recognised by Hungary’s Prime Minister Viktor Orbán, who awarded him the Cross of the Order of Hungary in 2014. He died at age 71 on July 30, 2017 in Sydney.

Murray began his career as a journalist in 1971 with his voice later becoming synonymous with football for Australian fans: he began working for SBS in 1980 and was the national tv network’s host for the 1986 World Cup, and seven more. He filled the post of football commentator and presenter of his ‘The World Game’ programme for decades, covering Australian qualifiers and virtually all World Cups ever since.

His former employers at SBS released this statement: “SBS is sad to advise that earlier today Les Murray passed away after a long period of illness. To say he will be sorely missed is an understatement. Many Australians know Les as Mr Football, who began working with SBS when it launched as a television broadcaster in 1980. His role went far beyond being a football commentator. The growth, popularity and success of football in Australia today is absolutely a reflection of his passion and advocacy for the game that he loved. Murray left a unique legacy.”

Les Murray was appointed Member of the FIFA Ethics Committee in the early 2000s and filled the mandate with the constrictive criticism it deserved: he would never hold back and voice disagreement when he encountered wrongdoing or dishonesty. This eventually led to his departure from the Ethics body of world football when he felt that too little was accomplished, and if anything, then too late.

Murray was a decent man, a good man. At Insideworldfootball we had the pleasure to meet him many times during his frequent visits to Europe, while covering World Cups or attending international football events. Murray was never afraid to tell people how he saw things. He could be a fierce advocate of good reporting and frequently encouraged this publication to dig deeper. Similarly he was never afraid to get on the phone when he disagreed.

Murray promoted the game at every opportunity and became a close friend and advisor of billionaire Frank Lowy who has been the main financier of the sport in Australia.

Murray never made a secret about his love for his country. And while that country was Australia on the one hand, a continent that have given him and his family a new existence and home, he remained Hungarian at heart all his life. He visited his land of birth at many occasions and always kept in touch with Hungarian football and Hungary.

Les Murray will be missed by many. We join his two daughters in mourning.