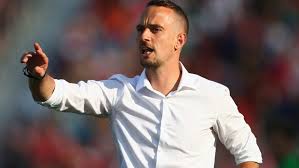 August 8 – The manager of the England women’s team, Mark Sampson (pictured), has been cleared of any wrongdoing after one his star players Eniola Aluko made a complaint to the Football Association about “bullying and harassment”.

Aluko, who has 102 caps, has not been selected since making the claims in May 2016, saying she had to quit the national team because of the alleged intimidation.

But the FA said an independent report found no evidence of wrongdoing by Sampson or his staff.

Aluko, part of the England team that won the bronze medal at the 2015 World Cup, worked as a TV pundit during Euro 2017 when England were knocked out in the semi-finals.

After the investigation was concluded in March this year, the FA still gave the 30-year-old forward a new contract, despite her saying she was not available to play “under his [Sampson’s] management”.

In her complaint, Aluko had stated: “It is inevitable that such damaging behaviour and bias from the ultimate leader of the group in the presence of my England team-mates will and has influenced other staff and team-mates to be empowered to also attempt to undermine and belittle.

“I submit that this is the basis of a culture of bullying and harassment.”

“Although I am well adjusted to the final decision of a manager, I submit that Mark Sampson’s negative personal behaviour towards me has led to inconsistency, disparity of treatment and confusion regarding the criteria for team advancement.”