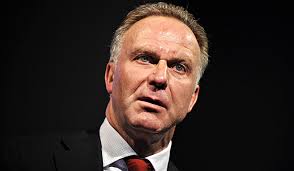 August 9 – Bayern Munich CEO Karl-Heinz Rummenigge is the latest footballing figurehead to express concern over the €222 million world record transfer of Neymar, saying all major stakeholders should “sit round the table” to discuss the whole question of inflated fees in order to prevent fans switching off from football.

Rummenigge, boss of the 200-strong European Clubs Association, says more “rationality” is needed to stop transfer fees spiralling out of control, pointing out that Neymar cost more than building Bayern Munich’s stadium when he switched from Barcelona to Paris St Germain.

“During the Neymar transfer I asked myself the question what would be more important: Neymar or the Allianz Arena,” Rummenigge told Sport Bild magazine.

“I have to say clearly that I prefer having the Allianz Arena which is also more important. We as Bayern Munich must have a different philosophy. Overall the Neymar transfer could cost even more than the arena.”

Bayern took out a €346 million loan in 2005 to build its new stadium on the outskirts of the city and paid off the 25-year loan 16 years early in 2014. When Neymar’s salary is added to his fee, the move from Barcelona to PSG is closer to €400 million.

Bayern’s transfer record was set in June when the Bavarians paid €41.5 million for France international Corentin Tolisso and Rummenigge is concerned about the gigantic fee for Neymar which more than doubled the previous world record fee that Manchester United paid for Paul Pogba when moved last August from Juventus to Manchester United for a €105 million.

“FIFA, UEFA, the ECA, leagues and the players union FIFpro should discuss this,” Rummenigge said. “I think we should all sit at the table, that would be my proposal. We could find more rational rules for football as a whole. Otherwise the public will not understand it anymore, fans will lose their connection.”

Meanwhile, Neymar himself is considering a formal complaint to FIFA against Barcelona over an unpaid loyalty bonus to his father, according to Sky sources.

This comes amid reports that his PSG debut could be delayed again as French football authorities have still not received clearance from the Spanish federation. If the deadline of tonight is missed, Neymar won’t play for PSG at Guingamp on Sunday.