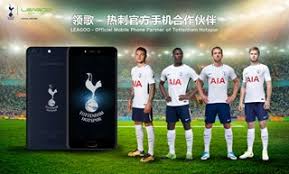 August 18 – Premier League Tottenham Hotspur have unveiled China-based smart phone and technology provider LEAGOO as the club’s Official Mobile Phone Partner in a five-year deal that starts with the 2017/2018 season.

LEAGOO was only founded in 2009 but since then has grown rapidly developing its own technologies and via its production facility in Shanghai. The company already has more than 50 million users via its subsidiaries in in Southeast Asia, Africa, the Middle East, North America and Latin America.

The Spurs deal will raise the company’s profile in the UK in particular but also via its 160 official supporters clubs worldwide and via the reach of the Premier League.

The deal will see LEAGOO promotion at Tottenham Hotspur’s home matches, as well as on the club’s digital channels.

As part of the partnership, LEAGOO is creating a range of Tottenham Hotspur phones and accessories.

Johnson Zhuang, CEO of LEAGOO, said: “We are proud to become an official partner of Tottenham Hotspur; a Club with an extensive worldwide fan base that will provide us with the opportunity to widen our reach…we are excited to create a new handset for the Club and its supporters.”

Tottenham Hotspur head of partnerships Fran Jones emphasised the long term nature of the partnership, saying: “We are delighted to bring such an exciting and ambitious company as LEAGOO on board as a partner. We look forward to working with them in the long-term to help grow their presence across the world, particularly in Asia, an area where the Club continues to increase in popularity.”