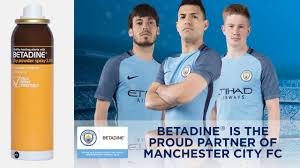 August 22 – Manchester City have upgraded their one-year old regional sponsorship with pharmaceutical company Mundipharama to a global deal for its BETADINE brand.

Manchester City medical team uniform and kit will feature BETADINE logos and staff will carry BETADINE® treatments for the players. Previously the logo only featured on medical staff kit in the sponsored region of Asia Pacific, Latin America, the Middle East and Africa

As well as logos on medical staff kit, the brand will have increased exposure across City’s digital media at home games, and will be given Official Healthcare Product Partner designation.

Mundipharma CEO, Raman Singh, said: “Football is a powerful and emotive way to engage with people and communicate messages about personal healthcare and well-being in a way that is relevant and taps into the emotional fan experience. Manchester City’s success and continued ambition provides a global platform and extraordinary reach. Football is the language the world speaks.”

Tom Glick, chief commercial officer of City Football Group, did not put a value on the deal but emphasised the growth of the partnership from local to global: “They have been a great partner from the outset. We have been continually impressed by the creative approach they have brought to everything we have done so far. We are delighted that we now have an opportunity to work together on a global scale.”