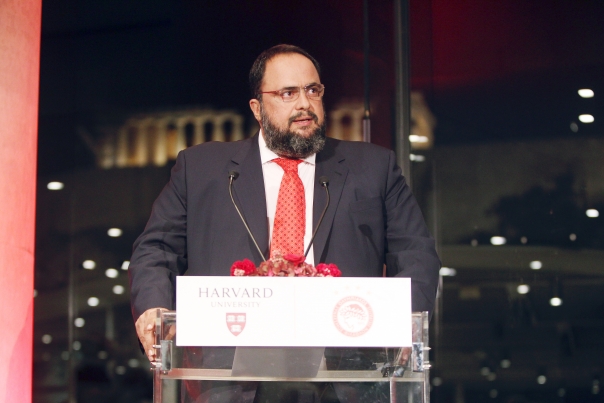 September 6 – Olympiacos president Evangelos Marinakis, speaking at the Athens conference ‘Reinforcing, Crossing, and Transcending Borders: Soccer in a Globalized World’ sent a message to the world’s leading clubs saying “it is vital that they now accept their social responsibility towards their communities, and the world, by means of promoting specific actions and initiatives that can change the lives of everyday people.”

“Hosted at the Acropolis Museum and led by Harvard University with support from Olympiakos, the conference focussed on the plight of refugees in Europe and how sport and football in particular had a responsibility to lead in areas of social inclusion and integration.

Here in Greece, the cradle of democracy and the Olympic Games, we can revisit this ancient tradition whereby sports became an opportunity for the Greek city-states and their citizens to connect, bring together different cultures, respect the rules of fair play and suspend legal disputes and wars for the duration of the Olympic truce, to ensure all athletes and spectators, irrespective of their class or social standing, could travel safely to the Games and peacefully return to their respective countries,” said Marinakis.

“Democracy is based on social justice, when all laws and regulations apply for everyone. Unfortunately in modern Greece social democracy does not apply to everyone, but this will hopefully change soon enough.”

Emphasising his point Marinakis said football “can cross borders, overcome ancient enmity and bring millions of people around the world together. In particular, we will see just how much the opportunity to play or watch sport can mean to refugees and displaced people.”

“We will see how, even in the midst of conflict and deprivation, sport can play a critical role. It can inspire; it can unite us; and it can bring out the best of humanity.”

Greece has been on the frontline of the refugees crisis, accepting waves of people fleeing war zones, poverty and oppressive regimes.

Central to the conference agenda were the establishment of The Athens Principles on the Right to Participate in Sport that were signed by Marinakis and will be distributed to clubs worldwide by Harvard University. Included in the Principles is a call to establish an International Day of the Right to Play which would affirm the right to participate in sport as a universal and fundamental right.