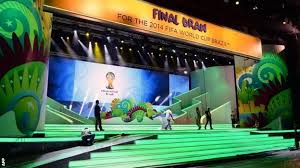 September 15 – FIFA have announced a new format for the 2018 World Cup draw with teams to be grouped by their places in the world rankings rather than by Continent.

The 32 finalists will be divided into four pots with the seven top-ranked teams plus hosts Russia in pot one, the next eight-ranked teams in pot two etc.

The draw for the previous World Cup in Brazil had teams divided according to rankings for pot one, and their continents for the remainder.

FIFA said the only geographical factor in the new-look draw will be that no group can include two teams from the same continent, with the exception of Europe. Rankings to be published on October 16 will be used for the December 1 draw in Moscow.

The decision  taken by the Organising Committee for FIFA Competitions effectively means all 32 teams will be seeded.