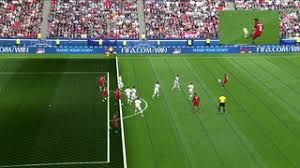 October 2 – Football’s lawmakers could reconsider implementing video technology at next year’s World Cup following a string of contentious officiating decisions at international and club level that have called into question the system’s effectiveness.

FIFA president Gianni Infantino has made no secret of the fact that he wants video assistant referees (VARs) to be used in Russia in order to rectify game-changing mistakes. But critics say there is not nearly enough proof that the process works properly and argue Infantino is rushing into technology prematurely.

VARs were first used in a FIFA competition at last December’s Club World Cup in Japan when the system – which can only be used for goals, penalty decisions, direct red cards and cases of mistaken identity – attracted considerable criticism.

Several countries are trialling video technology, including France, Germany, the Netherlands and the United States. But following a raft of questionable VAR rulings, including at the Confederations Cup last June and during the early part of this season, there is mounting evidence that more work needs to be done in order to ensure the technology does not prove counter-productive.

Football’s rule-making body, The International FA Board – comprising FIFA and the four home associations – will discuss the issue at its interim business meeting in December and again at its full annual session next March, three months before the World Cup.

Unless there is a noticeable improvement in the system’s efficiency, there is every chance lawmakers will put the brakes on implementation and call for further experimentation.

“My major concern is we are rushing into this,” said Welsh FA chief executive Jonathan Ford. “To have it at the World Cup finals is really quite a dangerous thing to do. It’s a high-risk strategy if it all goes wrong and has to be booted out afterwards.”

FIFA has four votes at IFAB meetings and the British associations one each. Every proposal needs six votes to pass but Ford said IFAB would not be bulldozed into giving the green light if it was clear that more time is needed for approval.

“Infantino wanted to make an impact when he became president and was very active in his first IFAB meeting last year to push through the notion of trials,” said Ford. “But all it needs is for a majority of the British associations to stand up and say they are not happy.

“I understand the English FA would probably want to push things through for the sake of progress. But if the tests are not going quite as well as hoped, do we really want to rush into a process that is not completely working? If there are continuing difficulties, there could well be a move to say ‘don’t do this at the World Cup’.”