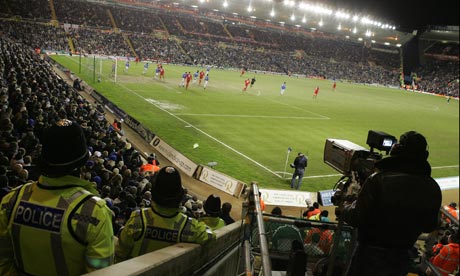 October 5 – English Premier League clubs have rejected a proposal to end equal distribution of overseas TV money and replace it with handing a greater share to those who finish highest in the table.

A summit on Wednesday was called to vote on Premier League executive chairman Richard Scudamore’s idea of 35% of income being distributed as “merit” payments based on league position, with the remaining 65% going equally to all clubs.

Traditionally most clubs’ biggest source of revenue has been domestic TV rights which bring in over £5 billion but Arsenal, Chelsea, Liverpool, the two Manchester clubs and Tottenham Hotspur – the so-called ‘big six’ – believe their greater appeal means they deserve more of the international income.

The more established clubs feel it is their global brands that has driven the rise in the Premier League’s foreign TV rights but no vote was taken due to a lack of support. Instead a statement read: “Clubs agreed to adjourn to allow further discussion.”

It had reportedly become clear during the meeting that the plan was significantly short of gaining the support of the 14 clubs needed for it to be passed.

The issue will be discussed again at the next meeting of club bosses in November. Speaking after his appearance at the Leaders Sport Business Summit in London, Swansea co-owner Steve Kaplan told the BBC: “Everyone came into the room with good intentions. I think they still have good intentions. I’m optimistic.”