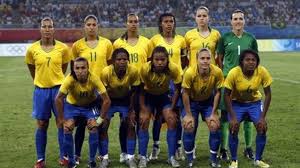 October 10 – The crisis in the Brazilian women’s game is deepening following an open letter from veteran players to the Brazilian FA (CBF) demanding gender equality and reform in the game.

At the end of September the CBF fired Brazil’s women’s coach Emily Lima in controversial circumstances. Lima’s results had been debatable, but she enjoyed the support of the players.

Under Lima, the Seleção Feminina won seven games, lost five and drew one. The CBF seized the double defeat away to Australia in two friendly matches as the opportunity to dismiss Lima and reinstate former coach Vadão, who had led Brazil at the Olympic Games in 2016. Lima was the first ever female coach of the team.

But her exit had other sporting ramifications, with five senior players – Cristiane, Rosana, Andreia Rosa, Francielle and Maurine –  retiring from the game, citing “exhaustion from years of disrespect and lack of support.” Cristiane was a top striker for the national team and a veteran of four World Cup and four Olympic tournaments.

“We, the players, have invested years of our own lives and all of our energy to build this team and this sport to its strength today,” read the letter, which was signed by eight former players, including Cristiane and Francielle as well as former World Cup stars Sissi, Rosana and Formiga. “Yet we, and almost all other Brazilian women, are excluded from the leadership and decision-making for our own team and our own sport.”

The letter garnered support from Moya Dodd, Hope Powell and Romario. With the situation escalating, the CBF and its president Marco Polo Del Nero have agreed to a meeting to listen to the players’ grievances, which is slated for October 17. Del Nero is still the subject of an international arrest warrant after he was indicted on corruption charges by United States authorities in the FifaGate scandal.

Under his presidency, the national women’s team has stagnated, exiting early from both the World Cup and the Olympic Games, suffering a defeat against Venezuela and dropping to their lowest position ever (9th) on the FIFA ranking.

“There are no meaningful pathways for former players to find their way into CBF and help to run their own game,” the letter written by the players said. “Over many years we have lived and watched in despair as Brazil’s women were neglected by CBF.”

The letter demands the CBF to “abide by international reforms to governance by including women at all levels of decision-making, especially on its Board” and “build an inclusive pathway into the game for the women who have practised the sport all their lives.”

The crisis is but one of many recent revolts in the women’s game, with the United States and Australia both demanding stringent reforms from their own governing FAs to support the women’s game.

Norway were the latest team embroiled in a crisis, asking equal pay. A new agreement between the Norwegian FA, the NFF, and the women’s internationals will lead to the women receiving the same financial compensation as their male counterparts for representing their country, with the men making a financial contribution to the women’s team.