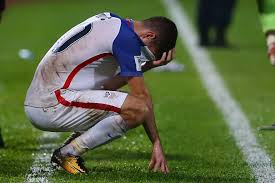 The US were beaten by lowly Trinidad & Tobago (no, it is one country, they weren’t playing two countries at the same time), lost fair and square and to add to their grief, Panama equalised against Costa Rica with a Thierry Henry type goal (“…the referee’s decision is final”, so don’t expect a Samoura-Senegal type replay decision to bail the US out).

The accumulation of the two events means that Russia will not be hosting their best friends next year. Of course a lot of people in Moscow and St Petersburg will be crying into their vodka…

After the final round of CONCACAF World Cup qualifiers, the usual crap hit the airwaves with multiple authors decrying the awful status quo of US Soccer. The US men NOT at a football world cup? Are you kidding? Unimaginable. After more than 30 years, the powerhouse of world football (well, in recent political circles perhaps), won’t be there when the teams that fought so hard to be there will fight it out to be the new world champion.

Frankly, few believed they had a chance to even progress from the group stages, but hey, you never know… this is football: anything is possible.

A few aspects of the dismal US fate are remarkable: for one, the referee of the Costa Rica-Panama match was not Canadian or Jamaican. The CONCACAF Grandees made sure that they had an advantage (or so they thought): the ref was actually a US citizen (erhm…of Mexican descent…). So, to assume foul play would backfire, wouldn’t it? How would a US referee do his worst to wipe out the last chance for the US team to qualify? He wouldn’t (although Vicente Fox may have given him a call, who knows..: he just cannot stand the IQ-Chief in charge of the White House, can he?).

Let’s therefore assume that the game was not rigged: no upstanding American would ever commit such a crime! Ok, good old Chuck did, and a few rights sales guys in Miami and New York did too, but that’s the past, isn’t it. But rigging a game? Not so much. Not in Trump’s empire! Although…

As for the Trini match, the only one who could barely hold back his joy and excitement was good old Uncle Jack, himself a pretty exposed figure in football whose future remains in the balance if he ever gets extradited to the country he now appears to hate. Jack was ecstatic and celebrated openly the defeat of the Dark Empire by the Trinidadian Davids. And purely on footballing grounds, you have to give it to him, at least a little bit: if you saw the game, the US were poor, disrespectful and deserved to lose. The US lost because they were the worse team. Not because Uncle Jack fixed it. He couldn’t anymore, could he?

Following this US horror show, the myriad of frustrated sports writers around the ‘Land of the Freeh’ (pun very much intended, and not a typo) took a deep breath and dealt their vitriolic hand. Their ire was directed not so much at Bruce Arena, whose team had failed, but much more (and increasingly so on Twitter and social networks), against Sunil Gulati, erstwhile close friend and ally of not only Chuck the Blazer but quite openly so of Uncle Jack and the many Byroms who have entirely disappeared from sight ever since the proverbial faeces hit the US fans in 2015 (and 2011 onwards, for that matter). This in itself is something of an irony. Valcke is currently getting shafted for ticketing stuff (and more recently for his friendship, and “gifts”, with and from Al Khalaifi of PSG fame, who is now under FIFA investigation too), but Gulati and the Byroms (a close relationship-based friendship) are amongst football’s untouchables. Or maybe Gulati not so much right now, although he says he will wait a few weeks to see whether he should run again for president (!). Surely, the good man suffers from delusions, to say the least.

He was cleverly planning to extend his term as USFF president, and all looked to be on track. Playing from behind (he was always quite good at that behind-the-scenes-game, with knives in the back and such, and think back to his antics at the FBI-laden CONCACAF Congress in the Bahamas), his next re-election was becoming a sure thing. Just like that of GI Joe in Zurich when Gulati & Co.  ran around the Congress floor between voting rounds to collect the votes for his pal.

They want his head, in the US. No, not the DoJ, they are his friends, clearly. But the media and more and more American pundits who have decided that enough is enough. They want him out, they talk about young blood to come in, about new management with different skills, about people who have no past to protect, but who have a future to build.

Who would have thought that Gulati might fall not because of his manoeuvring and conniving in football politics at regional and global level, but because of the game of football itself.