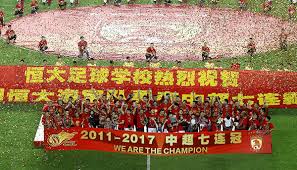 Guangzhou Evergrande’s title win was the club’s seventh straight domestic title and will probably be the last title won under Luiz Felipe Scolari who has won three league titles, the 2015 AFC Champions League, the 2016 CFA Cup and two CFA Super Cup crowns during his two-year stint at the club.

Scolari, whose contract is up at the end of the season, was confined to the stands because of his actions when he “entered the pitch, condemned the referee and interfered with the match” in added time in a match against Yanbian Funde on October 13. However, after the title was secured, with two games in hand, he joined in celebrations, being hoisted into the air by the players.

Scolari’s latest achievement is all the more remarkable give the high spending of rival clubs such as Shanghai SIPG and the loss of Paulinho to Barcelona.

After the game, assistant coach Paulo Turra commented: “This year has been the most difficult year, we’ve had lots of ups and downs.

“In the end, we have won the title and it is a great thing that deserves congratulations. Among the biggest leagues in the world, there are probably only two teams who have won a league seven years in a row and they are Lyon and Evergrande. Chinese fans should be proud of that.”

“The success should be attributed to the owner and the club first, then the management team and the best home stadium in Asia, including all the fans who follow us for our away games. I also want to thank the head coach.”

According to Guangzhou media, the club has already found a new manager to replace Scolari with those linked to the job including Carlo Ancelotti and Thomas Tuchel.