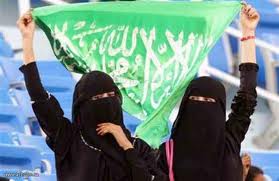 Saudi Arabia may be breaking through a long criticised barrier to allow women to watch sports in stadiums, but the real questions should perhaps be around what sports they will be able to watch.

An alternative narrative is that this news is a worldwide smokescreen to cover up a much deeper issue that could lead Saudi Arabia on the road to international sports exclusion – and perhaps even exclusion from the FIFA World Cup in Russia 2018.

The International Olympic Committee is understood to have become increasingly concerned by the situation and has held meetings on potential courses of action.

When Kuwait’s ruling party (read family) marched its own appointees into sports federation offices, the country was suspended by the IOC and FIFA, and still is. This ultimately resulted in a generation of Kuwaiti footballers missing out on Asian Cup and World Cup qualification. Pakistan has similarly been without a working football federation for so long (the government even kicked them out of their own federation offices) that one wonders if they even remember what a national team and football infrastructure could look like.

In Saudi Arabia the situation is slightly different, but only just. The political interference in football is reported by insiders to be increasingly tangible, with the Saudis now appearing to be walking a very thin line between global acceptance and international exclusion.

Football is the only major federation in Saudi Arabia that so far has not had its executive replaced by government appointees. But word from the region is that while Saudi’s football executives may still be in position, they aren’t calling the shots.

Saudi are performing at the top end of world football having qualified for the Russia 2018 World Cup, the AFC Cup in 2019, as well as having a team – Al Hilal –  in the Asian Champions League final.

Any obvious government meddling with the football federation could, theoretically, lead to an international governing body backlash that could suspend Saudi teams from those competitions. The prospect of this could be much closer than the Saudis and their autocracy might be imagining.

With football an increasingly valuable geo-political tool in the region, the Saudi political powerplay for sports position looks ill-advised as it runs the high risk of international sports governing body opinion turning against them.

The underlying motivation for more chips in the geo-political sports game is the Saudi-led blockade of Qatar. Saudi and its Egyptian and UAE allies in particular are using every influence possible to pressurise the hosts of the 2022 World Cup. With Qatar having taken a pivotal position across a broad range of global and regional football events and initiatives, any inconvenience and loss of face they can inflict is considered a goal well scored.

Disruption of any sports event brings far more headlines in global media than the blockade of thousands of tons of building aggregate.

FIFA last week washed its hands of the Palestine/Israel dispute saying it was a political issue that needed a political solution and not a football one. The governing body clearly has lost its appetite for trying to solve unsolvable political issues via the game. If the Saudis want to bring a new level of politics into football in their region and where FIFA is taking its showpiece event in five years time, then they could find that FIFA washes them out the game as well.

Look on the bright side. Could a Saudi exit reopen the Russian 2018 door for more fairly tale Syria stories?