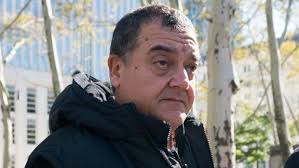 November 1 – Costas Takkas (pictured) became the second defendant in the FIFA corruption case to be sentenced in the US, receiving a 15-month jail sentence and being ordered to pay a share of $3 million in restitution to the Caribbean Football Union (CFU).

Takkas was arrested in the first May 2015 raids on Swiss hotels in Zurich in which six other FIFA officials were taken into custody by Swiss police on behalf of the US justice authorities. Takkas held no position in FIFA though was an advisor and friend of former CONCACAF president Jeffrey Webb and worked on an ad hoc basis without pay on protocol issues and projects for Webb at CONCACAF.

He had previously been unpaid general secretary of the Cayman Islands FA and instrumental in writing the rules of association of the national federation.

Takkas was held in prison in Switzerland for 10 months before being extradited to the US where he pleaded guilty to one count of money laundering.

The time he served in prison in Switzerland will be taken off his sentence and Takkas’ lawyer Gordon Mehler said he hoped that he would end up serving 90 days. Mehler had argued that Takkas was a minor figure in the corruption scandal that has engulfed FIFA and that he had been “caught up” in the excitement of being involved in international football and had acted because of his relationship with Webb.

While Mehler argued that Takkas’ actions did not “fit any traditional yardstick of money laundering”, US prosecutors were adamant that is exactly what it was.

Of the $3 million agreed as a bribe by Traffic Sports USA for Jeff Webb, Takkas pleaded guilty to transferring $1.75 million via company accounts in his name to Webb. Takkas did not take a cut of the money transferred or a fee for his services. The remainder of the $3 million bribe for CFU marketing rights was never paid to Webb by Traffic.

In the pre-sentencing papers, lawyers for CONCACAF entered the judicial process by requesting the prosecutor demand $3 million be paid as restitution to the CFU for the loss of the revenue and damages to their commercial rights.

Next week the trial of Jose Maria Marin, Juan Angel Napout and Manuel Burga – the former bosses of Brazilian, Paraguayan and Peruvian football – begins in the same Brooklyn courtroom.