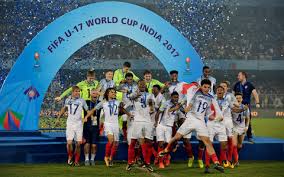 When England won the recent under-17 World Cup to add to their under-20  triumph in June, one of my journalist colleagues (I wish I could take the credit) came up with a novel and intriguing idea.

New rules should be drawn up, he wrote on social media, stipulating that those World Cup-winning youngsters attached to Premier League sides should be selected for at least half of every season – and must play for a minimum 45 minutes in each of those games unless injured.

That, he suggested, was the only way of ensuring their development and progression.

It was an admirable concept but one that will of course never materialise. The sad reality is that instead of becoming household names at senior level, most of the young players who did their country proud at under-20 and under-17 level will more than likely end up being forgotten, forced to ply their trade in the lower reaches of English football, such is the alarming short-termism and money-driven hunger for instant success that pervades the game at top-flight level.

England’s Football Association may have had a tough time of things off the field in recent weeks (make that months or even years) but they deserve considerable credit for developing the state-of-the-art national training centre, St George’s Park, producing high quality youngsters and instilling into them a winning mentality.

If only, the cry went up in the wake of the euphoric under-20 and under-17 triumphs, the same success could be achieved by the senior national team who for so many years have flattered to deceive, qualifying for major finals with a swaggering ease only to come crashing down to earth when the crunch comes against the best opposition.

Such false dawns have become a familiar scenario but is it all about to change after a phenomenal year for the nation’s age-group teams?  Brazil are the only other country to have been under-20 and under-17 world champions in the same calendar, back in 2003.  That’s some statistic but it is one only worth singing to the rooftops if England start benefitting at senior level just like Germany and Spain have done over the years by bringing through their own young talent.

Few anticipate Gareth Southgate’s team, back in the spotlight over the next few days with friendlies against Germany and Brazil as league football gives way to the latest international programme, pulling up many trees in Russia next year. But Qatar four years later? Stranger things have happened.

It was Greg Dyke, former English FA chairman, who gave the national team the target of winning the World Cup in 2022.  At the time, it seemed way too optimistic an aspiration but after what has occurred at under-20 and under-17 level, there is suddenly an air of genuine belief and optimism about the long overdue success of the senior side.

Phil Neville, formerly of England and Manchester United and now a well-respected pundit, told the BBC: “I think history maybe tells you that if your youth teams are winning World Cups and European Championships then that group of young players can go on and hopefully win the senior equivalent. We have seen it with Germany and Spain in the past decade.

But it’s a big if. The next couple of years will prove critical in terms of whether England’s young heroes are given an opportunity at top-flight club level or whether they will simply be squeezed out by another, far more depressing statistic: the number of England-qualified players starting in the Premier League this season is just 32.4% – that is just over three per team across 20 teams.

According to research carried out by the BBC, young English players are playing less top-flight football this season than their Spanish, German and Italian counterparts.  Of the England World Cup-winning under-20 squad, Dominic Calvert-Lewin’s appearances for Everton made up 62% of the entire squad’s total Premier League minutes. When it comes to the under-17 team, only one had appeared in a top-flight match.

For a country that is still harking back to 1966, considerable pride has been restored. England are world beaters again, their scintillating young guns displaying everything their senior professionals have for so long been accused of lacking.

The danger now, as everyone knows, is failing to create the right path for them to fulfil their potential and make the transition to senior level. Getting rid of the loan system under which the most affluent clubs hoard the best young talent, might be part of the way forward. So might quotas on foreign players but that’s an old chestnut which throws up all kinds of legal complexities.

Fast-tracking them into Premier League clubs may not be the most realistic solution either, however laudable. It’s important not to overhype what has been achieved so that impressionable young players avoid suffering too much pressure too soon.

But English football authorities must somehow find a way of ensuring that today’s bright young stars gain top-level experience and are not thrown on the footballing scrapheap, relatively speaking.

Otherwise everything accomplished in South Korea and India risks being wasted.