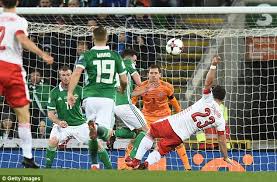 November 10 – Amidst growing debate over whether the formal introduction of video technology would prove counter-productive after of a string of poor judgements, Northern Ireland are ironically crying foul having seen their World Cup hopes take a dive because of two crucial decisions that almost certainly would have been overturned by the system.

The Irish were beaten 1-0 at home in the first leg of their World Cup playoff against Switzerland, with a mountain to climb in the return on Sunday in Basel.

Video assistant referees can only cover four specific match-changing areas – disputed goals, penalties, red cards and mistaken identity. The Irish feel they were undone by two of those: a dangerous early challenge on one of their players that probably deserved a red rather than a yellow card; and the Swiss penalty which won the game after Corry Evans was deemed to have handled when the ball struck his shoulder.

“I am staggered by the decision – it is bewildering,” said Northern Irish boss Michael O’Neill. “The ball hit Corry more on his back at the top of his shoulder, so it is incredible. No-one claimed a penalty. It was such a defining moment in the match and we feel very hard done by.”

“I spent three hours at a recent FIFA conference on video assistant referees. I’m not a huge advocate of it but it should be used for match-defining moments and this is an example of one. If the referee had had the benefit of a replay, he wouldn’t have given it.”

As for the red card that wasn’t given, O’Neill added: “It ticked all the boxes for a straight red card. It was two-footed and the player was off the ground.”