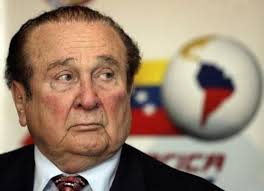 November 17 – A judge in Paraguay has authorised the extradition to the United States of former CONMEBOL boss Nicolás Leoz, alleged to have been one of the masterminds in the FIFAGate corruption scandal but who has so far managed to escape the clutches of US prosecutors.

Leoz, who led CONMEBOL from 1986 until 2013, has been under house arrest in the Paraguayan capital, Asunción, since June 2015 and is reported to be planning to appeal against the extradition ruling having long denied any wrongdoing.

Leoz, now 88, quit FIFA as an executive committee member, and CONMEBOL, citing health problems as allegations about him intensified but the extradition ruling could not be more timely, in the week that trials of key defendants in world football’s bribery and money-laundering scandal got under way in Brooklyn and he was repeatedly named as being a key figure in the alleged bribery and kick back schemes.

The US Justice Department suspects Leoz, for years seemingly untouchable, of receiving millions of dollars in bribes from marketing companies in exchange for TV and marketing rights but his legal team have so far frustrated all attempts to put him on trial.

“The court has finally resolved that the formal request for the extradition order is validated by the treaty and laws, and the extradition of Mr. Leoz has been granted so he can face trial in the United States,” said Judge Humberto Otazu.

On Thursday, a key prosecution witness in the ongoing Brooklyn trial, Alejandro Burzaco, former chief executive of sports-marketing giants Torneos y Competencias, claimed Leoz had pocketed a $5 million payment from FIFA that was meant for CONMEBOL from revenues generated by the Club World Cup.