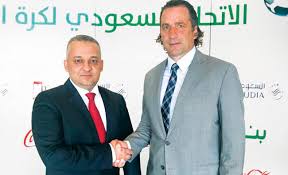 Pizzi, who until recently was in charge of Chile, will now be tasked with leading Saudi Arabia at next year’s World Cup in Russia after the West Asians sealed their ticket to the global extravaganza in September.

The 49-year-old arrives in Riyadh with a curriculum vitae that includes a 2016 Copa America title with Chile, as well as a spell with La Liga outfit Valencia.

“We wanted Pizzi because of his achievements in the past and his ambitions for the future,” said Saudi Arabian Football Federation President Abdel Ezzat (pictured left with Pizzi).

“We will do all we can to support him during preparations for the World Cup.”

Saudi Arabia qualified for Russia 2018 with Dutchman Bert van Marwijk at the helm, but the Dutchman sensationally left the role shortly after and was duly replaced with Bauza.

Under Pizzi, a former striker with Barcelona, the Green Falcons are set to make their fifth World Cup finals appearance, with the country’s best performance to date coming in 1994 when they reached the last 16.

At Friday’s eagerly anticipated World Cup draw in Moscow, Saudi Arabia will be in the fourth and final pot where they have fellow Asian heavyweights Australia, Korea Republic and Japan for company.