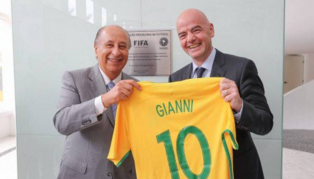 November 30 – A former accountant working with Argentina-based marketing firm Torneos y Competencias has told the FifaGate trial in New York  how he handled the payment of millions of dollars in bribes to powerful south American officials in exchange for the rights to broadcast tournaments and matches.

Eladio Rodriguez testified that company, along with two others, made the payments to FIFA’s late senior vice president and finance chief Julio Grondona, former Brazilian FA (CBF) presidents José Maria Marin and Ricardo Teixeira and – perhaps most of alarmingly of all since he is still the current CBF boss despite being one of those indicted – Marco Polo Del Nero (pictured in 2016 with FIFA president Gianni Infantino).

Grondona, who during his FIFA career was one the sport’s most powerful individuals, was paid at least $3 million in 2013, according to Rodriguez, with payments given the code ‘Pope’. He claimed that Marin and Del Nero were made payments under the code name ‘Brasileiro’, $1.5 million to each in 2013.

Rodriguez said it was necessary to pay bribes “to maintain a good relationship with and to obtain the signing of contracts.” He said he kept track of the payments by occasionally emailing himself copies of ledgers.

Rodriguez entered into a co-operation agreement with the US Justice department agreeing to help with the prosecution and has paid $675,000 to the US government in return for avoiding prosecution.

At the same trial, another prosecution witness claimed South America’s three voting members of the FIFA executive committee during the 2010 ballot that selected Russia for the 2018 World Cup, and Qatar over the United States for the 2022 World Cup were the sport’s most corrupt individuals on the continent.

Completing two days of testimony, former Colombian FA president Luis Bedoya – member of FIFA’s executive committee from 2014-15 who pleaded guilty in 2015 to racketeering conspiracy and wire fraud conspiracy – told the court he kept his own bribes secret from his wife and family.

Repeatedly asked by defence lawyers about the possibility of bribes to back Qatar, Bedoya said he and several other South American federation presidents supported the US bid but that he believed Grondona, Nicolas Leoz of Paraguay and Ricardo Teixeira of Brazil all voted for the Gulf state. Leoz was president of CONMEBOL from 1986-2013 and both he and ex-Brazilian strongman Teixeira, another of those indicted, have so far managed to avoid extradition.

Bruce L. Udolf, a lawyer for Burga, the former Peruvian federation president, asked Bedoya whether the three were the most corrupt people at CONMEBOL. “I believe so,” Bedoya said in Spanish through a translator. “I cannot prove it, but that’s what people say.” Grondona died in 2014.

Bedoya has been living in New York since December 2015 when the US government rented a two bed, two bath apartment for him and his wife. He has requested a visa to allow him to stay in the US and said that he “fled Colombia for their safety.” If he had remained in Colombia he would have faced criminal charges.

He pleaded guilty to US charges of corruption on 12 November 2015 and is currently scheduled for sentencing in the same court in which he is currently testifying on 5 January 2018.