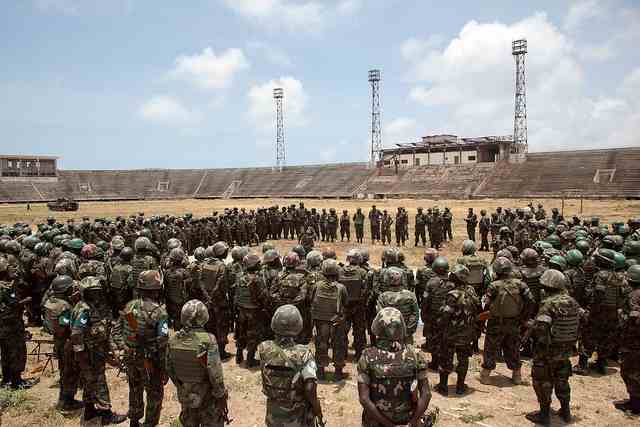 December 27 – Somalia took a step nearer to regaining control of their national stadium in Mogadishu after Somali Prime Minister, Hassan Ali Kheyre, confirmed that African Union peace keeping troops stationed at Stadium Mogadishu would withdra from the stadium by 2018.

He also said that they would plan a full reconstruction of Stadium Mogadishu as it returned to use as the country’s national football stadium.

“Getting stadium Mogadishu back into the hands of the people is one of our commitments to create more opportunities for the young football-loving Somalis and that will soon happen,” said Ali Kheyre at the closing of second edition of Somali Inter-State football tournament.

Football is Somalia is battling to get back on its feet with completion and national team matches following years of conflict in the country. The return of national team competition would come after almost three decades. Somalia hosted its last international match in Mogadishu in 1988.

Somali Football Federation president, Abdiqani Said Arab, said: “The situation in the country is changing and we are moving from the long-standing lawlessness to peace and stability and due to the betterment of the security situation in Somalia we have decided to stage our home games at home.

“Somali people have the right to watch their national team play at home and we have to make that happen now that the country is going ahead. 2018 will be a year of a big change for Somalia as we plan to invite national teams from some east African countries for friendly matches.”

“I am very delighted that our government is now arranging full construction for Stadium Mogadishu. The issue of troop withdrawals from Stadium Mogadishu was one of the main reasons for the visit of CAF president Ahmed Ahmed to Somalia in April 2017. The SFF has long been waiting for this development. Having Stadium Mogadishu back into use will foster football development in Somalia,” he said.