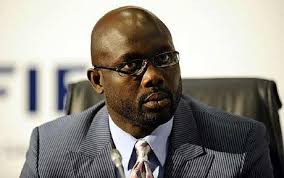 December 28 – It isn’t every day that a former World Football Player of the Year becomes president of his country but Liberia’s George Weah has made that remarkable transition after the second round of voting in a sometimes acrimonious election campaign saw him defeat 73-year-old Joseph Boakai who has been vice president for the last 12 years.

Weah, who played for a string of European clubs notably Paris St Germain, Arsenal and AC Milan, immediately took to Twitter to thank all his supporters, saying that he plans to liberate the country.

“It is with deep emotion that I want to thank you, the Liberian people, for honouring me with your vote today. It is a great hope,” he said after clinching 12 of the 15 counties in the West African country.

Weah, the only African ever to win the Ballon d’Or, becomes the 25th president of Liberia taking over from Ellen Johnson Sirleaf and  has promised to bring stability to a country wracked by 15 years of civil war.

Weah, who also won the Champions League during his career, paid special tribute to Arsenal manager Arsene Wenger for helping him to flourish in Europe. Wenger originally brought Weah to Europe when he signed him for Monaco.

“When I started playing football, I never thought I would ever win the Ballon d’Or and emerge as the best player in the world,” he told Britain’s Guardian newspaper.

“I just had a passion for the game and I worked hard. Every day, I would rather train than eat or sleep. When I moved to Monte Carlo [to play for Monaco] I didn’t play for the first six months. But I was determined to showcase my talent, to prove to those back home, who thought that my coming to Europe was a waste of time, that I was a good player. He (Wenger) was a father figure and regarded me as his son. This was a man, when racism was at its peak, who showed me love. He wanted me to be on the pitch for him every day.”

During his campaign Weah pledged to fight corruption and promised change by creating jobs for young people in Liberia, where more than half of the population is under the age of 35. He also wants to alter the style of leadership and bring transparency to government policy making.

In a savvy, but controversial move he chose Jewel Taylor, the ex-wife of dictator Charles Taylor as his running mate. Since 2005 Taylor has been a senator for the NPP party. She represents the nation’s largest ethnic group, the Kpelle.

Charles Taylor, who once claimed he possessed supernatural powers, is serving a 50-year sentence imposed by a United Nations Court for his responsibility in atrocities committed in Sierra Leone. Taylor became notorious for using child soldiers in Liberia’s civil war.

Weah lost in the 2005 election against the incumbent Johnson Sirleaf, but has steadily shaken off his reputation as a novice in the political arena. He has served in Liberia’s senate since 2015.