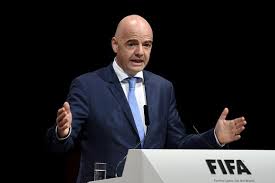 Infantino was the prime mover in the decision to break with tradition and add 16 more countries to the finals in 2026 and is keen to make it a permanent arrangement.

“We have to be more inclusive,” Infantino told the pre-Christmas International Sports Conference in Dubai.

FIFA is proposing an initial round of 16 groups of three teams. The top two teams in each group would qualify for a round of 32 knockout stage, followed by the round of 16, quarter finals, semi-finals and final.

The attraction of the new format, as well as financial, is that the world champion will still play seven games in 32 days – just as they do in the current 32-team World Cup. A total of 80 games would be played in all compared with the current 64.

“Because of FIFA World Cup being restricted to only 32 teams, US, Italy and Chile failed to qualify for the showpiece event,” Infantino said.

“If you want to develop the interest of people of any country, you have to make sure they play in the World Cup. Suppose if you have to win the last qualification match and your team fails to win, you don’t qualify. The coach is sacked and country’s federation president is flayed. Players are criticised until the September of the next year when qualification starts again for the next edition.”

With next summer’s Russia tournament rocked by Vitaly Mutko’s decision to step down as chief organiser in the wake of the ongoing doping scandal, Infantino took the opportunity to try and restore a positive message.

“We will try to make it an unprecedented event that will be remembered long after it is over,” he asserted.
“A lot of arrangements have been done both by the country’s local organising committee and FIFA to make it smooth, hassle-free and fans’ friendly.

“You don’t need visa, you can just enter the country with a fan ID card and get free transportation between the host cities. It is a beautiful country and there are 150 million people waiting to welcome fans.”

Buried in Infantino’s address was the eye-catching suggestion that FIFA bigwigs in future are subject to a salary cap – including himself.

“Our first investment is about safeguarding the reputation of FIFA that has been badly hit by corruption in the past,” he said. “It can be done by implementing a financial cap for everyone – including the FIFA chief – and bringing transparency in the modus operandi of the organisation. We have to work harder to restore our image after all those scams and scandals.”