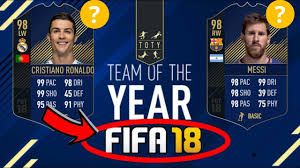 January 10 – FIFA’s video game partner EA Sports has launched a vote for its own FIFA Team of The Year, with voters using social media to post their votes and promote their selections.

The Team of the Year is being voted for by a specially selected list of media, athletes and EA SPORTS FIFA community members.

EA said: “This collective of ballot recipients has been chosen to represent the millions of EA SPORTS FIFA players all over the world.”

Voters have to pick teams of three attackers, three midfielders, four defenders and a goalkeeper in a 4-3-3 formation. They have 55 players to select from and are making their selections based on real world performances in 2017.

Each voter has received a custom-built digital ballot box that includes the shortlist of players. They cast their vote by posting a photo of their team on social media with #TOTYVote. Voting closes January 12 with the final team being announced January 15.

The selected voters make up 60% of the final selection with the remaining 40% of the votes being held by EA Sports.

EA Sports says that “special TOTY player items will be available in packs for a limited time in FIFA 18 Ultimate Team and FIFA Mobile.