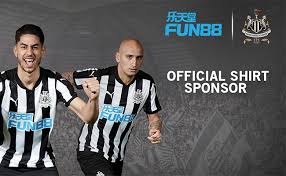 January 23 – Newcastle United has removed online betting firm FUN88 from the club’s youth team shirt. The sponsor’s logo was deemed by the club as a potential breach of FA regulations and comes after growing pressure on the UK government to look harder at the gambling advertising from betting companies in broadcast media and club sponsorships.

A Sunday Times investigation recently unveiled how young players were being used to advertise betting brands who collectively sponsor premier League clubs by more than £47 million.

FUN88 are at the start of a three-year deal with Newcastle, the club’s largest ever sponsorship reckoned to be worth more than £24 million. The removal of the company logo from the U18 team’s shirts is unlikely to affect that deal.

Newcastle also removed pictures of their U18 team from their website saying that they would retake team photos without the FUN88 logo.

Last November a government review of the on-line betting and gaming industry stayed clear of imposing new regulation on advertising and sponsorship revenues for football.

There has however been some self-regulation in football with the English FA abandoned its £4 million a year sponsorship deal with Ladbrokes last June after a series of disciplinary cases of players betting on matches – most notably Joey Barton who received an 18-month ban from football for betting on more than 1,200 matches over a 10-year period.

The FA said it’s decision was made after considering the propriety of the “governing body taking betting sponsorship, whilst being responsible for the regulation of sports betting within the sport’s rules.”

The FA said it would continue to work with betting companies, including Ladbrokes, as they play a key role in sharing information on suspect betting patterns, the key indicator in flagging up match-fixing. The Scottish Premier League also continued to work with Labrokes – as title sponsor. Ladbrokes extended its sponsorship to 2020 in a deal believed to be worth £5 million.

Last November the English Football League has announced a five-year renewal of its title sponsor Sky Bet. As part of an expanded set of rights, Sky Bet are the live streaming 16 mid-week matches on a ‘watch and bet’ basis.