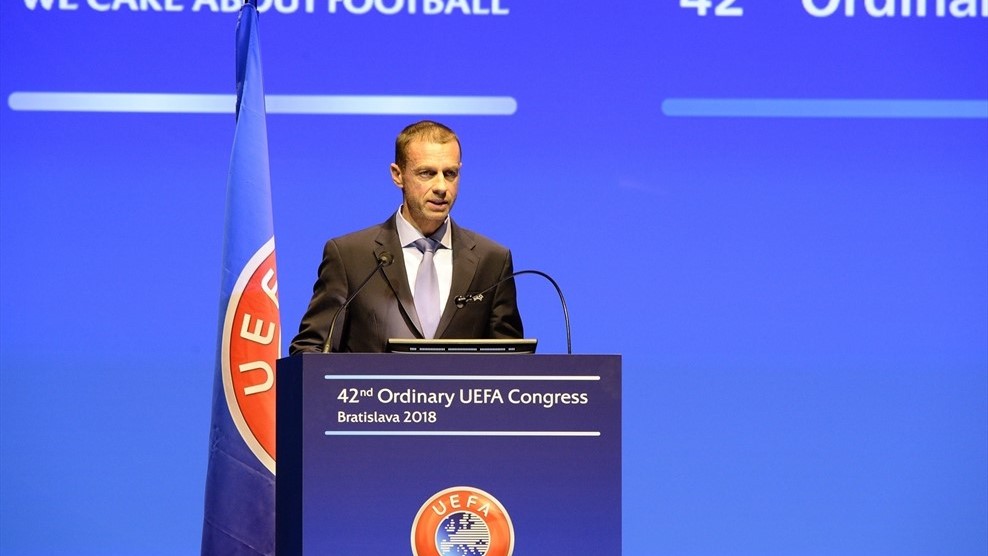 February 26 – Despite a measured and convincing plea to the whole of Europe to “put football first”, Jersey’s application to become the 56th member of UEFA was crushed at the organisation’s annual congress today when not a single federation supported its bid for inclusion.

Clearly influenced by UEFA president Aleksander Ceferin’s personal recommendation to reject the Channel Island’s application, 49 of UEFA’s 55-strong membership voted against the proposal, with one abstention. Five unidentified federations didn’t even have the courtesy to vote.

Jersey first submitted their application in 2015 but were refused access to the UEFA Congress by UEFA’s executive. The island nation then took their case to the Court for Arbitration of Sport (CAS) and won the right to go before today’s Bratislava congress, though CAS felt their application would fail under the Article 5 ruling in UEFA’s statutes that stipulate members have to be independent nations.

Jersey FA president Phil Austin argued forcefully that his island was not part of the United Kingdom and was recognised as a self-governing jurisdiction.

More pointedly, he cited a number of other sports that Jersey plays internationally “on a regular basis”, stressed that the English FA recognised his federation “in its own right”  and made the point that  Jersey would be sending their own team to the Commonwealth Games.

“In all other environments, Jersey is accepted as an independent nation and judged purely on its sporting credentials. Why then should football take a different view?” he asked.

Austin said his federation had taken strong legal advice in its interpretation of the Uefa statutes which he said were “ambiguous” at the time of application. “Jersey has its own government, its own parliament, makes its own laws and sets its own taxes,” he said.

UEFA, he added, was supposed to be about fair play and warned that if its application failed, the future of football on the island was in severe danger of disintegrating without international competition.

“We have reached a critical stage in the progress of our game,” Austin said. “Where do we go from here ? I ask you to put football first.”

But every one of his arguments fell on deaf ears. After he spoke and before the vote, Ceferin, who came to power championing the aspirations of UEFA’s lesser nations and calling for pro-active, courageous decision-making, steadfastly made his opinions clear by saying delegates could not simply violate UEFA’s statutes.

Although he didn’t say as much, the hidden agenda was that accepting Jersey would open the floodgates to other potential applications from self-governing regions.

Urging delegates to follow CAS’s ruling and reject the application, Ceferin said: “As Jersey cannot be considered as an independent state, the Jersey FA does not satisfy the admission criteria…of the UEFA statutes. We are ready to modernise and change football but we are not above our own statutes. That’s the difference.”

Later at a post-Congress press conference, Ceferin again made the argument that UEFA could not violate its own rules. Less convincingly, however, he brushed aside the five delegations who refused to vote. “Maybe they were having a coffee or were in the toilet,” Ceferin said nonchalantly.

While Jersey knew that the chances of winning recognition were stacked against them, they had hoped that UEFA might, as a second stage, open discussion on whether a new category of ‘affiliate’ status could be achieved that would enable them to maintain their football development ambitions internationally. That is a conversation for the future, if UEFA is willing.