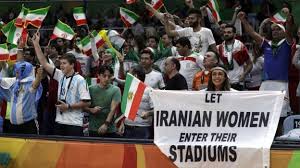 March 2 – Iran detained 34 women who tried to attend the Tehran derby between Esteqlal and Persepolis on Thursday. FIFA president Gianni Infantino was also in attendance, along with Iranian Sports Minister Masour Soltanifar.

Local authorities said they were temporarily held and would be released after the match.

Esteqlal vs Persepolis is arguably Iran’s biggest domestic fixture with the 80000-capacity Azadi stadium packed to the rafters hours before kick-off, but women are still prohibited from attending football games in Iran. The ban came in force after the Iranian Revolution in 1979.

Fervent female Iranian football fans have been known to defy the ban by dressing as men to sneak into grounds. On Thursday they had an extra reason to do so with FIFA’s supremo watching the game as a guest of honour. Infantino was in Iran on a two-day visit to take part in a ceremony to celebrate the 100th anniversary of Iran’s football federation.

Infantino addressed the ban in talks with the Iranian Football Federation, Soltanifar and Iranian President Hassan Rouhani, according to local newspaper Shahrvand.

Awkwardly, a live TV interview with Soltanifar, in the presence of Infantino, was taken off the air when a journalist asked when women would be allowed to attend football matches.

On social media there had been calls for women to protest against the ban outside the Azadi stadium. Ironically, Azadi means freedom in Persian.  In the lead-up to the game OpenStadiums – a movement of Iranian women campaigning to end the ban – wrote an open letter to Infantino calling on him to use his power and influence to end the ban.

OpenStadiums argued that the gender discrimination at the gates was a “clear violation” of the statues of both the Asian Football Confederation and FIFA.  Article 4 of FIFA’s statutes prohibits discrimination of any kind.

Part of the letter read: “It is time that the AFC and FIFA take a stand against those who actively and openly discriminate against female football fans in violation of statues, regulations, and human rights.”

“On behalf of all Iranian women that love football and merely want to attend matches to support their teams of choice, we urge you to take the necessary disciplinary action against the Iranian Federation to protect our rights.”

In an e-mail to Insideworldfootball, OpenStadiums expanded on the issue. “Activists and football fans independently decided to go to the west entrance of the Azadi stadium, 2 hours before the match police closed both connecting bridges and arrested any women in between, some of them were just walking, some of them were taking taxi…” read the statement.

“They were all captured by overt security forces and handed over to the police and then transferred to the Vosara detention, all this happened when the FIFA president was in the Azadi stadium watching Tehran’s derby with a hundred thousand men inside the stadium against article of their own statutes.”

“It has been the second time that a FIFA president visits Iran but none of them pushed for letting women inside the stadiums. Iran is the only country in the World Cup that bans women from their stadiums and any attempt to watch the games means risk of getting arrested.”

“Why watching football is like crime here and the responsible people do nothing?” concluded the statement.

On Thursday in an address to Iranian authorities and local legends Infantino made little reference to women’s football. The FIFA president referenced the 23,000 Iranian female football players in the country and said, somewhat Blatter-esqly, “and we have some representatives here, and they look fantastic.”

And of course, for a big country like Iran, much more can be done,” said Infantino. “So, my plea to all of you men and women is, let’s develop and encourage women’s football. Because we need  to care about 50% of our population. And let me congratulate the Iran Football Association, and the whole of Iran, for their brilliant successes in men’ football.”

On Friday, at the 4th Conference for Equality and Inclusion, Infantino struck a distinctly different tone, with a more upbeat message, painting himself as a combatant for Iranian women’s football. “Yesterday I saw in Teheran and I know that there have been some incidents, with some woman who where detained because they wanted to attend a football match. There was some criticism and rightfully,” said Infantino.

“In Iran you have 90 million people, 45 million A big power in this population belongs to women and women have a big passion for football. At 10 o’clock in the morning there were 1000,000 people in the stadium for a game in the afternoon. Men and women were in the streets of Teheran. There is passion for football, but there are laws in this country and today the laws prohibit women from attending football matches.

“We have to talk about this. It’s not easy. Let’s face the problem, so there are laws in this country that prohibit women from attending matches. There are two ways to deal with this. Either we criticise, we sanction or condemn, we don’t speak or we try and go there and have discussion and try to convince leaders of the country. Women’s football in Iran is a big reality. There are 23,000 women registered.”

For me, between the two options, I opt for the second one. I went yesterday to Tehran and I went to the President of Iran and I asked him “please, to consider to give access to women in the stadium. He promised me that this will be made.”

“I hope and I am confident. We will see. I was promised that women in Iran will have access to football stadiums soon,” concluded Infantino.