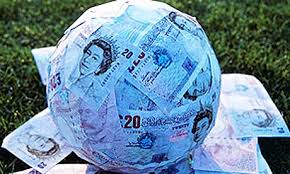 April 20 – Premier League clubs generated record operating profits of around £1 billion on aggregate revenues of £4.5 billion, according to Deloitte, in its latest piece of financial analysis on England’s top tier.

The professional services firm also confirmed what Insideworldfootball readers have strongly suspected for over a month: that collective pre-tax profits weighed in at about half a billion pounds – not far off triple the previous record set in 2013-14, the first year of the previous broadcasting rights cycle.

The strength of these latest figures is the product, essentially, of top-line growth, from the league’s new TV deals, comfortably outstripping player pay rises.

According to Deloitte, wage costs across the league rose by 9% to £2.5 billion, compared with a revenue growth figure of 25%. This left the widely-watched wage:revenue ratio at a comfortable 55% – the lowest for nearly 20 years.

According to Dan Jones, partner and head of Deloitte’s sports business group, the “relative restraint from Premier League clubs reflects both the extent of their financial advantage over other leagues and the impact of domestic and European cost control measures”.

Club finance directors would be well advised to savour this moment, however: the cascade of cash that lifted them all but irresistibly into the black last season looks unlikely to be repeated until at least 2022-23, and maybe never with such vigour.

We have become used to a cycle in which clubs’ financial performance peaks in the first year of the three-year period covered by each successive set of broadcasting deals. Unless clubs can achieve a level of cost control that has so far eluded them, this year and next will see aggregate profitability decline.

Moreover, the league’s 2019-22 TV auction looks likely to generate nowhere near such a turnover jump for clubs in 2019-20 as in 2016-17, although growth in international markets is generally expected to produce some upward momentum.

Insideworldfootball’s annual Premier League of Profits table will be published in coming weeks, as soon as the last two financial reports, those for Crystal Palace and relegated Sunderland, become available.