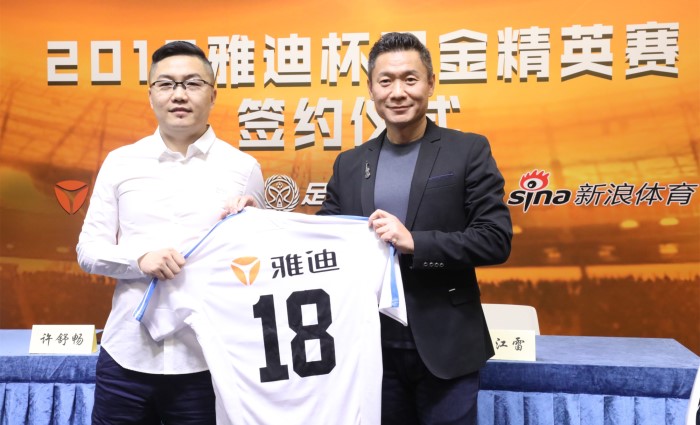 This is the second major sponsorship by Yadea has announced in recent months, agreeing to become an official regional Supporter of the 2018 FIFA World Cup.

Yadea is a market leader in the production of electric-powered motorcycles, bicycles and scooters. No value was given the company’s World Cup deal but it has been reported that an 8-figure sponsorship fee is being paid for the Futsal title sponsorship deal. While the FIFA deal works at the top end of the game, the small-sided sponsorship targets a broader playing base within China.

The Sina Elite 5X5 Football League 2018 will kick off on May 5 in Nanning, Guangxi, taking place in 17 cities around China and it is expected to attract 1,088 participating teams.

Yadea and Sina will jointly launch marketing campaigns with the theme of the 2018 FIFA World Cup. One promotion will be a sweepstake on social media with prizes including tickets to the futsal league games and match tickets for the 2018 FIFA World Cup, as well as dozens of two-wheel e-vehicles  presented by Yadea.

During the 2018 FIFA World Cup, Yadea and Sina will host carnivals around the event in Xi’an, Zhengzhou and Chengdu, in which Yadea will have the opportunity to engage with football fans.

Founded in 1997 and headquartered in Wuxi, Jiangsu Province, Yadea now exports to more than 50 countries.

FIFA’s chief commercial officer, Philippe Le Floc’h said in February at the signing of the 2018 World Cup sponsorship: “We ..are looking forward to working with them so that we can reach more football fans in such a major region for FIFA. Yadea appeals to young people and to a more sustainable lifestyle, two aspects that are extremely important to us.”

Yadea will receive a range of rights, including LED board exposure during the World Cup, access to tickets and brand association rights for its region.

Working the benefits of the World Cup sponsorship into the Futsal event sponsorship is an innovative component of Yadea’s marketing strategy.