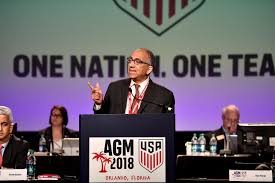 May 8 –The United 2026 bid chairmen have reinforced their commercial credentials for hosting FIFA’s first 48-team World Cup,  predicting a record revenue of $14 billion for FIFA, a profit of $11 billion.

Speaking to an audience of journalists at the AIPS Congress in Brussels , Carlos Cordeiro, president of US Soccer and United Bid Co-chairman promised “the most successful and profitable FIFA World Cup ever.”

The revenue bump for 2026, the co-bid chairman say, will come from opening up the largest commercial marketplace in the world for sports.

That will include more than $4 billion of match day revenues and $3.64 billion in sponsorship. While TV rights will generate $5.2 billion, a North America tournament would add a $300 million bonus to FIFA via contracts already negotiated with Fox and Telemundo.

Acknowledging that the 2026 World Cup has been politicised by wider global politics and in particular US president Donald Trump’d stance on immigration and his entry into the World Cup bid debate, Cordeiro said “…the question of who will host in 2026 has at times become mixed with geopolitics. We are asking that we be judged—not on the politics of the moment—but on the merits of our bid. This is also the first time that the decision on who hosts will be made by all FIFA member associations—publicly.”

While the “politics of the moment” may be different come 2026, the issue for the US part of the bid right now is getting unequivocal government commitment to allow entry for fans from all countries. Cordeiro was unconcerned by this potential pitfall.

“This is an opportunity for all of us—as one global football family—to put the world’s most popular sport on a new course and to do what’s best for the game,” he said.

“With this in mind, we believe that the decision on June 13 in Moscow comes down to one critically important question—which bid can deliver the most success to help sustain and grow FIFA and programs like FIFA Forward that help member associations achieve their highest potential?”

Addressing the unity of the three bids Decio de Maria, president of the Mexico Football Federation, said: “The same spirit that brings Mexicans together around football is the spirit of our bid. We are united as North Americans – nearly 500 million of us, all woven together as neighbors, friends and, most importantly, family. We share traditions, dance to each other’s music and eat each other’s foods. These days, Americans eat more tortillas than hot dogs! We are one North American community coming together in one United Bid.”

Focussing on the wider regional commitment from the CONCACAF nations and the wider Americas, de Maria said: “Our bid has been endorsed by the six voting federations of Central America—UNCAF. We’ve been endorsed by the 10 federations of South America—CONMEBOL. And we’re seeing strong and growing support for our bid – both in CONCACAF and from football associations around the world.

For his part Peter Montopoli, General Secretary of Canada Soccer, focussed on the operational readiness of the bid and the legacy it would leave. “With the new, larger 48-country format, I want to also make a point about another important topic—legacy. Because our stadiums are already built and operating, we can be certain that they will have a guaranteed use after 2026. They will not be costly “white elephants” that burden local economies. They will help sustain football and other sports for many years to come,” he said.

The commercial and operational delivery are powerfully attractive incentives for FIFA’s voting members.

While not directly addressing the geo-political and anti-American noise that has plagued this bid process, Cordeiro did refer to the human rights issues that are new to the FIFA bid criteria this time round and which at times have become a diverging and diverting battleground in the hosting debate.

“We hired an outside firm to independently assess our laws and practices, identify gaps we needed to address and we made those findings public. We engaged human rights stakeholders – over 70 people and 40 NGOs and UN agencies. We have developed a new human rights “scorecard” to evaluate Candidate Host Cities. And guided by our comprehensive human rights strategy, we will uphold the universal human rights of all people, regardless of gender, ethnicity, nationality, religion, disability or sexual orientation,” he said.