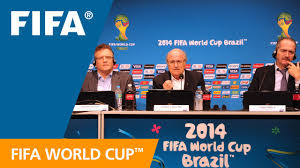 May 10 – In a move that seems likely to be regarded in some circles as a protectionist measure to avoid negative publicity, FIFA has scrapped its daily media briefings at next month’s World Cup, with a need-to-know policy installed instead.

FIFA’s head of media Hans Hultman confirmed the new strategy at this week’s AIPS Congress in Brussels saying FIFA will simply deal with media enquiries on a normal regular daily basis and that specific briefings would only be organised in Moscow when necessary.

“If there is no reason to do it, we will only do it when it is needed,” he said. “We are expected to meet with the main press agencies and main media from around the world regularly.”

Without a daily briefing FIFA will have its work cut out taking queries on a daily basis judging by the huge number of media covering the tournament.

“To date, approximately, 3500 applications from written press, website, photographers. In total, with broadcasters, we will have around 15,000 accredited when it comes to the start of the World Cup,” Hultman revealed.